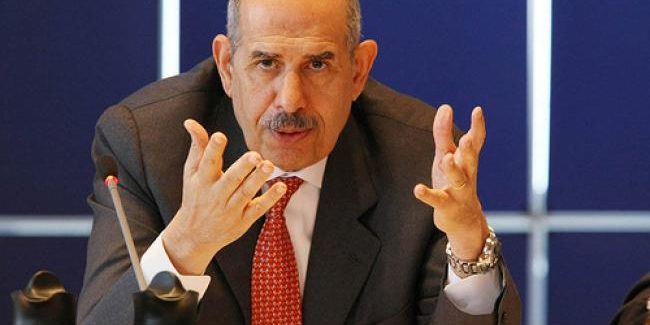 By JPOST.COM STAFF & ASSOCIATED PRESS — Opposition figure tells crowds in Cairo: “What we’ve begun cannot be reversed”; Muslim Brotherhood throws support behind ElBaradei, gives him mandate to negotiate unity gov’t. Speaking to protesters gathered in Cairo’s central Tahrir Sqaure Sunday evening, opposition figure Mohamed ElBaradei spoke to the crowds, and demanded regime change.
ElBaradei arrived at Cairo’s Tahrir Square Sunday evening, as crowds swelled by the thousands over two hours into a government-imposed curfew. He was met by chants of: “The people want the regime to fall,” according to Reuters.

ElBaradei spoke to the crowd gathered in the square for the sixth straight day but did not speak to reporters. Live television feeds from the square in central Cairo showed the opposition figure in the large crowds.

Earlier Sunday, the Muslim Brotherhood threw its support behind ElBaradei to hold proposed negotiations with the government in order to form a new unity government.

ElBaradei, in an interview aired on CNN Sunday, said that Egyptian President Hosni Mubarak must leave the country immediately.

“It is loud and clear from everybody in Egypt that Mubarak has to leave today, and it is non-negotiable for every Egyptian.” he said. He added that it should “be followed by a smooth transition a national unity government to be followed by all the measures set in place for a free and fair election.”

Addressing Mubarak’s Friday night move to sack his entire cabinet, ElBaradei said, “I think this is a hopeless, desperate attempt by Mubarak to stay in power.” He added that it “is loud and clear from everybody in Egypt that Mubarak has to leave today, and it is non-negotiable for every Egyptian.”

The statements came as protests continued in central Cairo, where tens of thousands of protesters were reportedly gathered despite an announced curfew and strong military presence. Fighter jets swooped low over Cairo in what appeared to be an attempt by the military to show its control of a city beset by looting, armed robbery and anti-government protests.

Minutes before the start of a 4 p.m. curfew, at least two jets appeared and made multiple passes over downtown, including a central square where thousands of protesters were calling for the departure of Egyptian President Hosni Mubarak.
Addressing protesters through what appeared to be a megaphone, ElBaradei said: “They stole our freedom, and what we have begun cannot be reversed. As we mentioned before,” he added, “we have a key demand, for the regime to step down and to start a new era.”