Cairo: Anger starting to focus on Israel, US 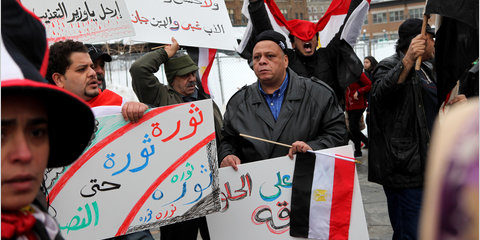 Saturday’s optimism on the streets of Cairo for imminent political change gave way to anger on Sunday, as thousands of demonstrators became increasingly frustrated with the lack of response from major world leaders, especially the US.

During the main protest on Sunday in downtown Cairo, one man painted a 20- meter-long message in flowing Arabic cursive that echoed across the square: “Go Away, Mubarak, you are from the Americans, and you’re working for them!”

Egyptians understand that the world is waiting to see if President Hosni Mubarak falls to popular pressure before major leaders decide which side to support. But this is infuriating the demonstrators, who realize that six days of unrest have not accomplished their goal and that they need united international pressure in order to topple the almost-30-year incumbent.

The protests have lacked a clear leader to unite them and provide an alternative to Mubarak, and demonstrators are beginning to focus their wrath not just on Mubarak and the country’s widespread corruption, but also on the United States and, to a lesser extent, Israel. They blame Israel and the US for supporting a government because it is convenient for them, not because it is good for the Egyptian people.

“The USA does not support democracy; they’re supporting Israel, which is like their baby,” said Ahmed, a 26-year-old Cairo resident. “They think Egypt is functional because it’s in favor of their considerations.”

“I don’t care if we have peace or not,” Ahmed continued, echoing the indifference of many demonstrators who don’t have a clear agenda for what they want a future Egypt to look like, as long as it does not include Mubarak. “But will Israel allow us to have a real president? For example, Turkey elected an Islamic government, but it was their choice. Will Israel give us the freedom to make the same choice?” he asked.

Demonstrators are relying on the foreign press to get their message to Obama.

“Isn’t this democracy?” they asked me over and over when I said I was a journalist from America, incredulous that the country held as the pinnacle of world democracy could ignore such widespread popular sentiment.

“Obama has to be on our side. Where is your democracy?” asked Osam L, who works at a foreign bank in Cairo.

“You say Arabs are just donkeys, but the USA is supporting the system, not the people.”

The Jewish community in Cairo and Alexandria both declined to speak with the media, but told The Jerusalem Post that all of its members were safe and going about their daily routine as normally as possible.

Life is slowly returning to Cairo streets after nearly a week of unrest. Many of the stores in the downtown area remained shuttered, but convenience stores and cell phone kiosks were doing brisk business. There was significantly more traffic on the roads, and public transportation and trash collection were partially operational.

At 3:55 pm on Sunday, two fighter jets flew low over the city half a dozen times, ostensibly to remind everyone of the 4:00 pm curfew. The scare tactic was successful – by 4:30, the streets were mostly empty of cars as throngs of people headed on foot toward Tahrir Square.

Sunday’s protests were much less violent, although there was more anger directed at international leaders.

“What you are seeing here is an explosion. We have no other choice,” yelled one demonstrator.

The main protest in Tahrir Square continued to be attended by thousands of demonstrators from all walks of life – toddlers with small flags draped around their shoulders raising a fist in solidarity, old men in traditional garb walking slowly with canes near the sidewalks, giggling school girls, whole families marching arm and arm, young professionals as well as laborers.

“Those people that say we’re out here because of food or oil prices, that’s not true,” said Osam L. “I have enough to eat, thank God. I’m here for my freedom.”