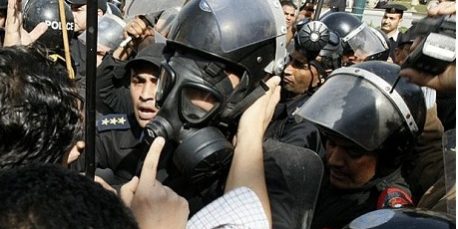 Today the Egyptian regime faces its gravest threat since Anwar Sadat’s assassination thirty years ago. As protesters take to the street for the third day in a row demanding the overthrow of 82-year old President Hosni Mubarak, it is worth considering the possible alternatives to his regime.

Thursday afternoon, Egyptian presidential hopeful Mohammed ElBaradei, the former head of the UN’s International Atomic Energy Agency returned to Egypt from Vienna to participate in anti-regime demonstrations. As IAEA head, Elbaradei shielded Iran’s nuclear weapons program from the Security Council. He repeatedly ignored evidence indicating that Iran’s nuclear program was a military program rather than a civilian energy program. When the evidence became too glaring to ignore, Elbaradei continued to lobby against significant UN Security Council sanctions or other actions against Iran and obscenely equated Israel’s purported nuclear program to Iran’s.

His actions won him the support of the Iranian regime which he continues to defend. Just last week he dismissed the threat of a nuclear armed Iran telling the Austrian News Agency, “There’s a lot of hype in this debate,” and asserting that the discredited 2007 US National Intelligence Estimate that claimed Iran abandoned its nuclear weapons program in 2003 remains accurate.

Elbaradei’s support for the Iranian ayatollahs is matched by his support for the Muslim Brotherhood. This group, which forms the largest and best organized opposition movement to the Mubarak regime is the progenitor of Hamas and al Qaida. It seeks Egypt’s transformation into an Islamic regime that will stand at the forefront of the global jihad. In recent years, the Muslim Brotherhood has been increasingly drawn into the Iranian nexus along with Hamas. Muslim Brotherhood attorneys represented Hizbullah terrorists arrested in Egypt in 2009 for plotting to conduct spectacular attacks aimed at destroying the regime.

Elbaradei has been a strong champion of the Muslim Brotherhood. Just this week he gave an interview to Der Spiegel defending the jihadist movement. As he put it, “We should stop demonizing the Muslim Brotherhood. …hey have not committed any acts of violence in five decades. They too want change. If we want democracy and freedom, we have to include them instead of marginalizing them.” The Muslim Brotherhood for its part has backed Elbaradei’s political aspirations. On Thursday it announced it would demonstrate at ElBaradei’s side the next day.

Then there is the Kifaya movement. The group sprang onto the international radar screen in 2004 when it demanded open presidential elections and called on Mubarak not to run for a fifth term. As a group of intellectuals claiming to support liberal, democratic norms, Kifaya has been upheld as a model of what the future of Egypt could look like if liberal forces are given the freedom to lead.

But Kifaya’s roots and basic ideology are not liberal. They are anti-Semitic and anti-American. Kifaya was formed as a protest movement against Israel with the start of the Palestinian terror war in 2000. It gained force in March 2003 when it organized massive protests against the US-led invasion of Iraq. In 2006 its campaign to get a million Egyptians to sign a petition demanding the abrogation of Egypt’s peace treaty with Israel received international attention.

Many knowledgeable Egypt-watchers argued this week that the protesters have no chance of bringing down the Mubarak regime. Unlike this month’s overthrow of Tunisia’s despot Zine El Abidine Ben Ali, they say there is little chance that the Egyptian military will abandon Mubarak.

But the same observers are quick to note that whoever Mubarak selects to succeed him will not be the beneficiary of such strong support from Egypt’s security state. And as the plight of Egypt’s overwhelmingly impoverished citizenry becomes ever more acute, the regime will become increasingly unstable. Indeed, its overthrow is as close to a certainty as you can get in international affairs.

And as we now see, all of its possible secular and Islamist successors either reject outright Egypt’s peace treaty with Israel or will owe their political power to the support of those who reject the peace with the Jewish state. So whether the Egyptian regime falls next week or next year or five years from now, the peace treaty is doomed.

Since the start of Israel’s peace process with Egypt in 1977, supporters of peace with the Arabs have always fallen into two groups: the idealists and the pragmatists.

Led by Shimon Peres, the idealists have argued that the reason the Arabs refuse to accept Israel is because Israel took “their” land in the 1967 Six Day War. Never mind that the war was a consequence of Arab aggression or that it was simply a continuation of the Arab bid to destroy the Jewish state which officially began with Israel’s formal establishment in 1948. As the idealists see things, if Israel just gives up all the land it won in that war, the Arabs will be appeased and accept Israel as a friend and natural member of the Middle East’ family of nations.

Peres was so enamored with this view that he authored The New Middle East and promised that once all the land was given away, Israel would join the Arab League. Given the absurdity of their claims, the idealists were never able to garner mass support for their positions. If it had just been up to them, Israel would never have gotten on the peace train. But lucky for the idealists, they have been able to rely on the unwavering support of the unromantic pragmatists to implement their program.

Unlike the starry-eyed idealists, the so-called pragmatists have no delusions that the Arabs are motivated by anything other than hatred for Israel, or that their hatred is likely to end in the foreseeable future. But still, they argue, Israel needs to surrender.

It is the “Arab Street’s” overwhelming animosity towards Israel that causes the pragmatists to argue that Israel’s best play is to cut deals with Arab dictators who rule with an iron fist. Since Israel and the Arab despots share a fear of the Arab masses, the pragmatists claim that Israel should give up all the land it took control over as a payoff to the regimes, who in exchange will sign peace treaties with it.

This was the logic that brought Israel to surrender the strategically priceless Sinai Peninsula to Egypt in exchange for the Camp David accord that will not survive Mubarak.

And of course, giving up the Sinai wasn’t the only sacrifice Israel made for that nearly defunct document. Israel also gave up its regional monopoly on US military platforms. Israel agreed that in exchange for signing the deal, the US would begin providing massive military aid to Egypt. Indeed, it agreed to link US aid to Israel with US aid to Egypt.

Owing to that US aid, the Egyptian military today makes the military Israel barely defeated in 1973 look like a gang of cavemen. Egypt has nearly 300 F-16s. Its main battle tank is the M1A1 which it produces in Egypt. Its navy is largest in the region. Its army is twice the size of the IDF. Its air defense force constitutes a massive threat to the IAF.

And of course, the ballistic missiles and chemical weapons it has purchased from the likes of North Korea and China give it a significant stand-off mass destruction capability. Despite its strength, due to the depth of popular Arab hatred of Israel and Jews, the Egyptian regime was weakened by its peace treaty. Partially in a bid to placate its opponents and partially in a bid to check Israeli power, Egypt has been the undisputed leader of the political war against Israel raging at international arenas throughout the world. So too, Mubarak has permitted and even encouraged massive anti-Semitism throughout Egyptian society.

With this balance sheet at the end of the “era of peace,” between Israel and Egypt, it is far from clear that Israel was right to sign the deal in the first place. In light of the relative longevity of the regime it probably made sense to have made some deal with Egypt. But it is clear that the price Israel paid was outrageously inflated and unwise.

In contrast to the Egyptian regime, as the popular outcry following Al Jazeera’s publication of the Palestinian negotiations documents this week shows, the Fatah-run Palestinian Authority is as weak as can be. Yitzhak Rabin, the godfather of the pragmatist camp famously argued that Yassir Arafat and Fatah would handle the Israel-hating Palestinian Street, “without the Supreme Court and B’Tselem.”

That is, he argued that it made sense to surrender massive amounts of strategically critical land to a terrorist organization because Arafat and his associates would repress their people with an iron fist, unfettered by the rule of law and Palestinian human rights organizations.

And yet, the fact of the matter is that Arafat commanded the terror war against Israel that began in 2000 and transformed Palestinian society into a jihadist society that popularly elected Hamas to lead it.

The leaked Palestinian documents don’t tell us much we didn’t already know about the nature of negotiations between Israel and Fatah. The Palestinians demanded that the baseline of talks assume that all the disputed territories actually belong to them. And for no particular reason, Tzipi Livni and Ehud Olmert agreed to these historically unjustified terms of reference.

While this was well known, in publishing the documents, Al Jazeera has still made two important contributions to the public debate. First, the PA’s panicked reaction to the documents exposes the ridiculousness of the notion that the likes of Mahmoud Abbas, Saeb Erekat and Salam Fayyad are viable partners for peace.

The Al Jazeera papers also expose Livni’s foolishness. Just as she failed to recognize the inherent weakness of the Lebanese state when she championed UN Security Council Resolution 1701 which called for the Hizbullah-dominated Lebanese army to deploy to the border with Israel at the end of the 2006 war, so Livni failed to understand the significance of the inherent weakness of Fatah as she negotiated away Gush Etzion and Har Homa.

And she didn’t need Al Jazeera’s campaign against the PA to understand that she was speaking to people who represent no one. That basic fact was already proven with Hamas’s victory in the 2006 elections.

The truths exposed by the convulsive events of the past month make it abundantly clear that Israel lives in a horrible neighborhood. It is a neighborhood where popular democracy means war against Israel.

In this neck of the woods, it is not pragmatic to surrender. It is crazy.