'Schalits have no faith in those supposed to free Gilad' 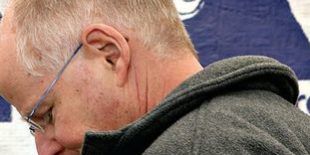 Noam Schalit on Thursday said that his family has lost all belief in everyone involved in bringing about his son’s release.

He said that any belief the Schalit family did have disappeared a long time ago in light of the lack of results their efforts have yielded.

Schalit’s comments came in an Israel Radio interview in which he was responding to reports that a German mediator had visited Gaza to discuss the release of his son, captured IDF soldier Gilad Schalit.

Schalit said he hoped that Hamas and the government would “regain their composure” and work out a deal that would bring about the release of his son after almost five years.

However he added that his family had not been in contact with Prime Minister Binyamin Netanyahu in the last four months. In any event, Schalit said, the family does not want meetings, but rather actions.

Conrad reportedly suggested new ideas to Hamas that could lead to Schalit’s return to Israel, to no avail.

Israel Radio quoted a Hamas sources as saying that Conrad had visited Gaza three times in the last three months, including a visit that took place on Wednesday.