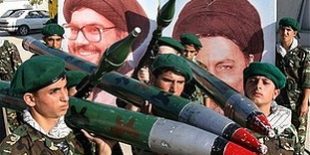 With backing from Tehran, Hizballah and its Christian ally Michel Aoun abruptly quit the Lebanese unity government Wednesday, Jan. 12, in a move that could pave the way for their seizure of power in Beirut. They struck as the Special Tribunal for Lebanon’s prosecutor Daniel Bellemare prepared to hand over to the pre-trial judge “within hours or days” indictments naming Hizballah officials in the case of the former premier Rafiq Hariri’s assassination in 2005.

Hizballah is committed to defying those indictments and refusing to hand over its top officials for extradition by the government.

As the Lebanese crisis raced towards it climax, President Barack Obama, Saudi King Abdullah, French President Nicolas Sarkozy and Lebanese Prime Minister Saad Hariri held intense consultations in Washington and New York on a united front against Iran-backed disruptions in Beirut by Hizballah and its allies.
Iran’s supreme ruler Ayatollah Ali Khamenei has said repeatedly that the STL and its rulings are “null and void” because they serve “foreign interests.”

As the US, France and Israel made military and diplomatic preparations to thwart a clash, Obama scheduled a meeting with the Lebanese Prime Minister for Wednesday night, Jan. 12, to decide how the US, France and its allies would act in a conflagration.

Over the weekend, the US president ordered US vessels to buttress the Sixth Fleet stationed in the eastern Mediterranean with the USS Enterprise carrier and its strike group with 6,000 sailors and marines aboard and 80 fighter-bombers. Already deployed there is the USS Bainbridge missile destroyer.

On Monday, Jan. 10, US Secretary of State Hillary Clinton, on a tour of the Persian Gulf, expressed concern over the situation in Lebanon. Clinton said: “I’m deeply worried about the efforts to destabilize Lebanon. We should do everything we can to make sure those warnings are not accurate.”

American military moves in the Mediterranean are intended to signal to Tehran and Hizballah that Washington will be prepared to use force to defend the Saad Hariri government in Lebanon and if necessary deploy aerial forces and the marines to avert a Hizballah takeover in Beirut. The French fleet was also ordered to bolster its naval strength opposite Lebanon.

But Hizballah got its move in first. Its resignation from the Hariri government showed that its leaders and Iranian sponsors were not fazed by the US-French military moves off the Lebanese coast and were moving ahead with their plans.

debkafile’s military sources add that a comment by Israeli Prime Minister Binyamin Netanyahu Tuesday, Jan. 11, fit into the picture taking shape in Washington, New York and Paris. He remarked to foreign journalists that 60,000 missiles and rockets, all of Iranian and Syrian origin, were now pointing at Israel.

Last week, Meir Dagan, at a ceremony marking the end of his tenure as head of the Mossad, said that only 10 countries in the world have firepower on a par with that of Hizballah.
According to our sources, it is definitely on the cards for an Iranian-Hizballah move in Lebanon provoking a US-French military response to evolve into a clash between Hizballah and Israel, providing an opportunity for the destruction of Hizballah’s might missile arsenal.