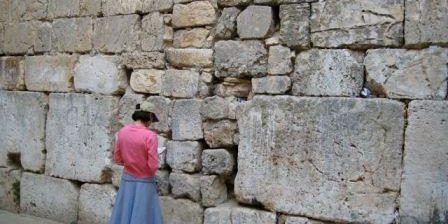 For the first time in nearly 40 years, refurbishing work has begun on the Kotel HaKatan, the Small Wailing Wall in the Old City of Jerusalem.

The Kotel HaKatan is the little sister of the world famous Western Wall (Kotel). Both are exposed faces of the original western wall of the Temple Mount, built by King Herod over 2,000 years ago. However, while the Western Wall has been a pilgrimage and prayer site for Jews for centuries, is easily accessible, and is hundreds of yards long, the Small Wall has long been little-known, is out of the way, and is barely 10 meters long.

In addition, because less of its height has been exposed and because its plaza is much narrower, the Small Wall appears lower and less impressive than the Western Wall. However, it is actually even holier than the known Wall, because of its location 200 yards more to the north – and therefore practically opposite the actual site of the Holy of Holies in the Holy Temples.

One would not know this upon visiting it, for it lacks the trappings of a holy site, and is not even protected 24 hours a day. An ad-hoc committee named Kotleinu, “Our Wall,” manned primarily by Old City residents, has been working to promote and improve conditions at the Kotel HaKatan – and fruits of their labors have begun to blossom.

Specifically, for the first time, a sign identifying the location as the Small Wailing Wall has been posted. In addition, the Antiquities Authority, commissioned by the Jerusalem Development Authority, removed a cluster of useless building-supports from the far end of the small plaza. A local resident explained to Israel National News the background and significance of this move:

“These supports, which have essentially separated the prayer area from the courtyard of the Arab residents who live in the adjoining building, have been there since 1972. What happened was that the late Rabbi Meir Yehuda Getz, the Rabbi of the Kotel, happened to be in the lower level of the Kotel HaKatan area, where they were digging the Western Wall Tunnels, and he heard very loud banging coming from above. He ran up to see what was going on, and to his horror, he found city workers driving beams directly into the Wall in order to serve as supports for the Arab house. What happened was that the building had become unstable, either because of the dig or because of water gathered below, and was condemned. But then-Mayor Teddy Kollek decided that this house had to be saved no matter what , and so he put the families in hotels and brought in contractors, who, without thinking very much, planned to simply put beams into the Wall. Thus, Rabbi Getz saved the Small Wall; the Chief Rabbis even held a ‘funeral’ for the sacred stones that had been destroyed in the process…

“In any event, in order to support the building, a network of props and supports was built to hold up the building – but many years ago already, it was noted that the props were not even touching the building! Yet nothing was done to remove them – until now, thank G-d.”

Despite the fact that the props did not actually support the building, at least one Arab newspaper reported on their removal with anger, blaming “Jewish extremist worshipers” for actions liable to cause the building to collapse.

The Jewish resident acknowledged that there is an intrinsic problem in the area, “in that many more people now live in that building, and they use the plaza as a passageway.” Though direct clashes have been few – exceptions include the notable arrest of a Jewish man in the midst of his holy Yom Kippur prayers after residents complained that he blew the shofar there – she expressed hope that a solution would be found, possibly in the form of a wall demarcating a corridor for the Arab residents to pass through.

Other hoped-for improvements include a restoration of some of the crumbling stones of the Wall, a new floor, drainage, and wheelchair accessibility.