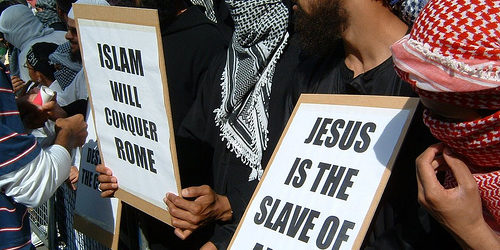 Just last month, Palestinian President Mahmoud Abbas made the Palestinian policy of religious apartheid crystalline: “If there is a Palestinian state with Jerusalem as its capital, we won’t agree to the presence of one Israeli in it.”

We can only assume that Mr. Abbas means Jewish Israelis, since it’s inconceivable he’d deny the right of Israel’s 1.5 million Arab Israelis to live in a Palestinian state. And here, of course, is the irony: Israel accommodates a huge Arab (overwhelmingly Muslim) population and accords them equal rights under law, yet the Palestinians totally reject the notion of Jews living among them.
This should be no surprise, since Muslims generally reject—either statutorily or through social pressure and even violence—the legitimacy and presence of non-Muslims. The New Year’s-day bombing of a Coptic Christian church in Alexandria, Egypt underscores the hostility Christians endure throughout the Middle East.

In fact, as this week’s FLAME Hotline makes clear, Christians are being driven out of—and their population is declining in—every country in the Middle East. But wait: What is the only exception to this anti-Christian trend? You guessed it: Israel, the only Middle Eastern country that doesn’t have a Muslim majority is the only country where the Christian population is increasing.
Just as the Palestinians increasingly deny any Jewish rights to the Holy Land, so too are Christians being pushed out of the birthplace of their faith.

Of course the supreme irony is that the U.N., lead by Muslim nations, continually issues declarations accusing Israel of apartheid.
My friends, it is up to us to make sure this story of anti-Christian and anti-Jewish Muslim apartheid is spread widely. While both Christians and Jews pray and work for peace in the Middle East, Muslim nations are pushing the olive branch (and those holding it) brusquely away. Please use the “forward to a friend” button below to spread the truth—and this disconcerting article, “Can Christianity Survive in the Middle East?”—to friends, family and colleagues.