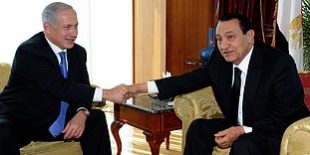 Israel needs to reexamine its policies and initiate steps to build trust with the Palestinian Authority so that negotiations can be restarted, Egyptian President Hosni Mubarak told Prime Minister Binyamin Netanyahu on Thursday.

The two leaders met in Sharm e-Sheikh and held a lengthy, friendly and comprehensive discussion that focused on the bilateral effort to advance the diplomatic process, according to a statement from the prime minister’s media adviser.

Netanyahu reiterated that he believes that a peace agreement between Israel and the Palestinians is possible provided that the latter are willing to end the conflict. He asked Mubarak to act to persuade the Palestinians to move to direct, intensive and serious negotiations – in which all core issues will be raised – forthwith.

The prime minister updated President Mubarak on the rapid progress in constructing the fence along the border with Egypt and added that the fence would help reduce the number of Africans who infiltrate into Israel through Egypt, some of whom remain there.

After the meeting, an expanded lunch was held with the participation of Industry, Trade and Labor Minister Binyamin Ben-Eliezer, who is considered to have good relations with the Egyptians. Ben- Eliezer, a Labor party minister, threatened earlier this week that his party would quit the government in two months in the absence of any meaningful diplomatic process.

Netanyahu said that Israel is committed to aggressively fighting terrorist elements in Gaza that endanger its security and peace.