US against anti-settlement resolution in Security Council 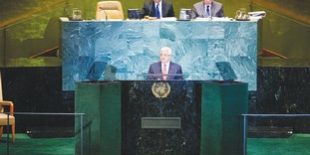 “We have consistently opposed taking these kinds of issues to the UN Security Council,” State Department spokesman Mark Toner said at a press briefing, though he declined to specify whether the US would actually veto a resolution should it be voted on.

Israeli officials said various draft resolutions on the matter were currently being discussed in New York, and the degree to which a resolution would run into US opposition would depend on its final language, and whether it called for operative steps such as sanctions.

The Associated Press obtained a copy of a draft on Wednesday calling settlements a “major obstacle to the achievement of peace.” It does not, however, call for sanctions, and urges both sides to continue negotiations toward a final peace agreement.

The draft resolution reaffirms Palestinian claims that “Israeli settlements established in the Palestinian Territory occupied since 1967, including east Jerusalem, are illegal and constitute a major obstacle to the achievement of a just, lasting and comprehensive peace.”

Additionally, the document demands that Israel “immediately and completely ceases all settlement activities in the occupied Palestinian territory, including east Jerusalem, and that it fully respects all of its legal obligations in this regard.”

Israeli officials said the more watered-down the resolution, the less likely that the US would use its veto to block it.

While the Europeans consistently say that settlements are illegal under international law, the US – with the exception of the Jimmy Carter administration – has generally refrained from adopting that language, instead characterizing the settlements as “illegitimate.”

Toner emphasized that “final-status issues can only be resolved” through direct negotiations rather than a UN vote, a long-standing US position.

However, he also reiterated America’s continued opposition to Israeli settlements.

“We don’t accept the legitimacy of continued settlement activity,” Toner stated, labeling such continued construction “corrosive to our peace efforts,” as well as to Israel’s future.

Erekat, meanwhile, denied earlier reports that claimed the Palestinians were planning to ask the UN Security Council to recognize a Palestinian state early next year.

He said that the Palestinians had no intention of making such a request in the near future.

The PA also rejected on Wednesday any talk about an interim solution with Israel. The announcement came in response to Prime Minister Binyamin Netanyahu’s remarks in an interview with Channel 10 on Tuesday.

Nabil Abu Rudaineh, a spokesman for PA President Mahmoud Abbas, said that the Palestinians were opposed to an interim agreement because it would exclude the issues of Jerusalem and the refugees.

“Renewed talk about a Palestinian state with temporary borders is completely unacceptable and wouldn’t lead to real peace,” Abu Rudaineh said. “The time has come for decisions on final-status issues and the establishment of a Palestinian state on the June 4, 1967 borders, including east Jerusalem, the West Bank and Gaza Strip.”

Erekat, in discussing the PA move to take the settlement issue to the UN, was quoted by the German press agency DPA as saying that “the Israeli government is witnessing an international isolation that it hasn’t witnessed before.”

He said this was “due to the efforts exerted by the Palestinian leadership” and by Abbas.

But Palestinian boasts that its policies were successfully isolating Israel were dismissed in Jerusalem, with Foreign Ministry spokesman Yigal Palmor saying that for all the “isolation” talk, “patients from the Arab world seeking treatment for their ailments were coming to Israel.”

Palmor said that “isolation was very much in the eye of the beholder.”

Wealthy patients from countries such as Iraq, Jordan and the Persian Gulf come to Israel to take advantage of its advanced medicine, government officials said Wednesday, unwilling to provide numbers or indicate whether this included political elites.

Palmor said that even as Erekat talked about an isolated Israel, it was attracting more investment than the financial support the Palestinian Authority was getting from the Arab world.

One diplomatic official cautioned the Palestinians against becoming “intoxicated” by the fact that four South American countries had either recognized a Palestinian state, or declared their intention to do so in the near future.

“Diplomatic fireworks will not bring about a state,” the official said. “Fireworks look spectacular momentarily in the sky, but then disappear.”

Deputy Foreign Minister Danny Ayalon said in response to Erekat’s threat to take a resolution to the Security Council that “desperate attempts by the Palestinians are the result of a dead end that they led into because of their preconditions. A real Palestinian state, and not a virtual one, will be established only through negotiations with the elected government of Israel.”

Ayalon called on the international community to “show responsibility” and not create illusions for the Palestinians.