The monstrous charge of illegality 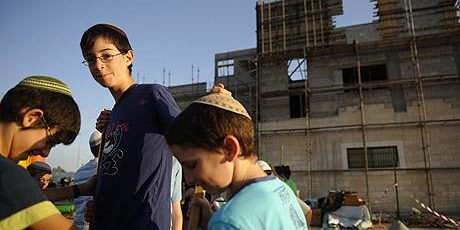 “The EU position on settlements is clear: They are illegal under international law and an obstacle to peace. Recent settlement-related developments, including in east Jerusalem, contradict efforts by the international community for successful negotiations,” said Catherine Ashton, the EU foreign policy chief, on Dec. 9, after Israel refused to halt building construction in Judea, Samaria and Jerusalem.

The UN, the U.S., the EU, Britain, The International Court of Justice at The Hague – these governments and entities all claim that Israel’s “settlements” are illegal. They repeat the false charge so often it has become gospel.

When this charge was in swaddling clothes, Shmuel recognized its importance and the urgent need to combat it. Over 30 years ago, in 1978, he began to write about this “monstrous charge.” The smear was started by State Department lawyers under the Carter administration. They were looking for legal ammunition to challenge Israel’s hold on the territories it captured in the 1967 war.

The question of the legality of our actions has become the central indictment in a many-voiced political campaign, whose influence may well be most destructive.

In “America’s Bad Joke” (The Jerusalem Post, April 6, 1979), Shmuel gives the best analysis and refutation of the outrageous charge, which is based on a distortion of the fourth Geneva Convention. We quote him at length.

This charge of illegality (with its hint of odiousness, even of criminality) has proved one of the most effective weapons in Washington’s propaganda campaign against Israel.

After all, if the government of the US itself, presumably primed by the best legal opinion, declares Jewish settlement to be illegal under international law, the average citizen will assume that there is good legal ground for the charge.

The fact is that the charge of illegality is little more than a bad joke. Far from the administration’s policy being a reflection of serious legal thinking, it is demonstrably the government’s lawyers who have tailored their opinion to suit the government’s policy. This may be regarded as professionally legitimate.

A legal adviser is not a priest of righteousness. He is a professional lawyer who is presumably expected to serve his client’s interests by making the best of his client’s case. Now the State Department’s case in support of its charge has seen the light of day. It was originally prepared by the legal adviser for the enlightenment of two curious congressmen; but as all such documents have to be made available for public inspection it found its way into the “Journal of International Law” (October 1978).

There is no merit in mincing words about this document. It is a distortion, not always subtle, both of the relevant facts and of the international agreement Israel is alleged to have contravened; the fourth Geneva Convention of 1949 “Relative to the Protection of Civilian Persons in Time of War”.

The primary fact about this convention is that it is not relevant to Jewish settlements in Judea, Samaria and Gaza; nor, indeed, to the Israeli presence there.

The convention’s applicability is defined precisely in its second article: “The present convention,” it says, “shall apply to cases of partial or total occupation of the territory of a High Contracting Party”.

Now Israel did not and does not occupy the territory of a High Contracting Party. True, she wrested the territories from Jordan and Egypt, but these territories did not belong to them.

They acquired them in an act of naked aggression in their invasion of Western Palestine in 1948.

This pact does rather create a dilemma for the legal adviser. It leaves him without a case.

To insist that Article Two is applicable would mean explicitly to condone the 1948 aggression (about whose political and genocidal purpose the invaders made no secret at the time).

What is he to do? The Jewish settlements have to be illegal. Otherwise the Arabs will be annoyed, oil prices might go up, who knows — Saudi Arabia might initiate an embargo.

The solution turns out to be simple: Ignore Article Two, do not quote it, do not mention it, erase it. The legal adviser consequently boldly insists that the “principles” of the convention “appear applicable whether or not Jordan and Egypt possessed legitimate sovereign rights in respect of these territories”. He then announces that the paramount purpose of the convention is “protecting the civilian population of an occupied territory”.

Having cleared the ground of the unhelpful text of the convention itself, and having amended it to suit his purpose, the legal adviser might now reasonably be expected to follow up with his proofs that Israeli settlements do indeed interfere with, or prevent, or reduce the protection of the Arab population in Judea, Samaria and Gaza.

The reader will wait with bated breath for the lurid details. He will wait in vain. After all his labours, the legal adviser obviously discovered that Jewish settlement has not had any adverse effect on the protection of civilians in the areas. He could, of course, make some up. That kind of thing has been done before. But this is apparently no job for a legal adviser. He therefore simply leaves the subject, claims nothing, makes no charge, and goes on to the next “proof” of Israeli illegality.

His “exhibit” is Article 49 of the convention — made particularly famous by much debate among international lawyers.

Article 49 had a special history and a specific purpose. It was designed to proscribe actions of a specific nature that had characterized the Nazi occupation in Europe. They had deported people, sometimes whole communities, some to Germany, others to occupied territory, some to labour as slaves, some to be killed.

The first paragraph of Article 49 therefore lays down that: “Individual or mass forcible transfers, as well as deportations of protected persons from occupied territory to the territory of the Occupying Power or to that of any other country, occupied or not, are prohibited, regardless of their motive”.

In some cases, the Nazis transferred Germans into the occupied territories to replace and “inherit” from the expelled local population.

The last paragraph of the Article, therefore, proceeds to prohibit this type of action. Paragraph 6 says :

The Occupying Power shall not deport or transfer parts of its own civilian population into the territory it occupies.

It is on this sixth paragraph of Article 49 that the US Government hangs its charge of illegality against Jewish settlement in Judea, Samaria, Gaza, Sinai and the Golan Heights.

The legal adviser obviously realizes that the bare text itself (about deportation or transfer of parts of a civilian population) is hardly a reasonable description of how the groups of young Jewish men and women went up to the Golan Heights, and down to the Jordan Valley and on to the bare hills of Samaria.

Without noticeably blinking an eyelid, he, therefore, seriously suggests that it is enough that the government was involved in the location of settlements, in making land available to them and in financing them in order to qualify as a government that meets the criteria of paragraph 6 that is of “deporting or transferring parts of its own civilian population into the territory it occupies”.

Far more grave is his pretence that he does not know the background and the significance of the form of words used in Article 49, nor what the specific purpose of the whole article was. Indeed, he denies there was such a purpose…

He writes: “Another view of Paragraph 6 is that it is directed against mass population transfers, such as occurred in World War II for political, racial and colonization ends; but there is no apparent support or reasons for limiting its application to such cases”.

This is simply not true. This is not “another view” (though the thrust of the text makes such a “view” unanswerable). It is the official explanation for the drafting of Article 49.

It is hard to believe that the legal adviser to the State Department has not read the official Red Cross commentary on the Geneva Convention (even if only for his brief on Israel illegality). It was the Red Cross that organized the diplomatic conference in 1949 in Geneva where the convention was adopted, and the commentary it prepared at that time is the official authoritative source for the background and the meaning and the purpose of its provisions.

On Paragraph 6 of Article 49, the commentary says: “It is intended to prevent a practice adopted during the Second World War by certain Powers, which transferred portions of their own population to occupied territory for political or racial reasons or in order, as they claimed, to colonize those territories.

Such transfers worsened the economic situation of the native population and endangered their separate existence as a race”.

Such are the essentials, such is the weight of the case the State Department’s legal adviser scrambled together in order to provide a fig-leaf of professional justification for the administration’s cynical policy.

There is something additional in the legal adviser’s “opinion” which must interest everybody concerned about US policy towards Israel.

The legal adviser’s document inadvertently sheds a strong light on the inherent hostility which animates the State Department. His statement is embedded in what purports to be a survey of the historical background.

That “background” is a hotch-potch of misinformation, implicit and explicit.

As one example: the document twists and turns in order not to have to mention that Israel was compelled by Arab aggression to fight two defensive wars over the territory of Western Palestine.

Here, for instance, is the total description of the Six-Day War. “During the June 1967 war, Israeli forces occupied Gaza, the Sinai Peninsula, the West Bank and the Golan Heights”. That is all. Not a word of who or what started the war, or — again — of its annihilatory purpose.

This is a sample of the style of the document which, as a whole, is an effective reflection of the spirit which inspires so much — though not all —of American policy — a spirit that finds a natural expression in the ridiculous, yet monstrous, charge that Jewish settlement is “illegal”.

For the layman, no one laid it out better or earlier than Shmuel. But for those who wish to go deeper into the legal basis of modern Israel, please see The Legal Foundation and Borders of Israel under International Law, (Mazo Publishers, Jerusalem). This 660 page treatise, written by Howard Grief, a former adviser on international law to the late Professor Yuval Ne’eman, Minister of Energy and Infrastructure in the government of Yitzhak Shamir, is the definitive, landmark work. It provides the entire legal framework of the State of Israel, shattering, in the words of Zionist writer William Mehlman “every myth, lie, misrepresentation and distortion employed over the 61 years of Israel’s existence to negate the sovereign rights of the Jewish People to their national home.” (For those specifically interested in the applicability of the fourth Geneva Convention, please see pages 610-619, among other sections.)

US prepared to recognize Israeli annexation of Judea and Samaria
April 28, 2020