IDF to deploy super-armored tanks along the Gaza border 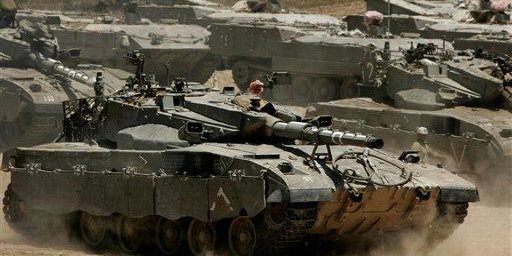 The Israel Defense Forces decided on Sunday that it will begin deploying tanks equipped with an active armor protection system known as Windbreaker to the border area along the Gaza Strip.

Discussions were held with the Southern Command, the General Staff operations department and the Ground Forces Command about making changes to IDF forces in the area. Originally a battalion from the 401st Brigade was to have deployed its armored units in the area. However, a different battalion from the same brigade, the 9th, will now be deployed with its Windbreaker-equipped tanks.

The Rafael produced system, which is marketed abroad as Trophy, is capable of neutralizing advanced anti-tank missiles at different ranges. Following the Second Lebanon War, the IDF decided to procure the system because of the many incidents in which anti-tank missiles fired by Hezbollah guerrillas managed to damage IDF tanks.

The main focus of IDF ground activity in the Gaza Strip is the buffer zone of several hundred meters inside the Strip from the fence along the border. During the past two years Gazans have avoided engaging IDF forces entering the area – operations mainly aiming to identify mines laid by militants.

However, there have also been cases of sniper fire, anti-tank missile fire and the detonation of improvised explosive devices against the IDF patrols. Even though there have been low key altercations, there is concern that a Palestinian strike against an Israeli armored vehicle will spark a greater conflagration which will expand and end with massive rocket fire against civilian communities in Israel.

Also, two rockets fired from the northern Gaza Strip hit southern Ashkelon last night. There were no reports of injuries or damage. It is believed that the rocket fire came in response to an air strike on Saturday night against a cell of militants preparing to launch rockets into Israel. Five Palestinians were killed in the attack, members of the Islamic Jihad and the Popular Resistance groups.