Yes, genocide is an American Concern 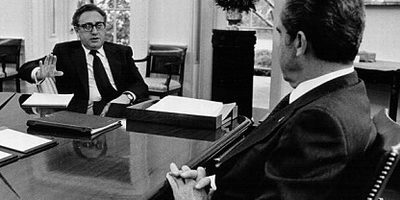 by Jeff Jacoby, The Boston Globe

The Israeli Prime Minister, Golda Meir, has just been to the White House, where she implores President Nixon to press the Soviet Union to allow the emigration of Jews who wish to leave. In the Oval Office after she leaves, the president and his national security adviser, Henry Kissinger, are discussing her request.

“The emigration of Jews from the Soviet Union is not an objective of American foreign policy,” Kissinger tells Nixon, tapping the table for emphasis. “And if they put Jews into gas chambers in the Soviet Union, it is not an American concern. It may be a humanitarian concern –”

“Well, we can’t blow up the world because of it,” Nixon responds.

That conversation, secretly recorded on March 1, 1973, is included in the latest batch of White House tapes released by the Nixon Library. Though nearly 38 years have elapsed, it is shocking to hear Kissinger’s insistence that another Holocaust ought to be a matter of indifference to the United States. That opinion would be appalling coming from any American official; coming from a German-born Jew whose family fled the Nazis and who lost at least 13 close relatives in the concentration camps, it seems almost obscenely callous.

What would prompt a man like Kissinger to say something so grotesque? Was it a “Jewish inferiority complex,” as Shmuley Boteach writes in the Jerusalem Post, that had the first Jewish secretary of state “bending over backward to show he bears no special kinship with his people”? Was it “an instinctive affection for totalitarians of all stripes,” as Christopher Hitchens poisonously claims? Was it just another instance of what Kissinger’s biographer Walter Isaacson called a “yearning to be liked” and an effort “to impress Nixon with gutsy hardline advice”?

I have no theory to offer about Kissinger’s psychology. Nor do I think one is necessary. For the simple and heartbreaking fact is that the position he took in that long-ago conversation with Nixon — that not even genocide should properly be considered “an American concern,” or be allowed to interfere with the preservation of global stability — has time and again driven US foreign policy.

When Jews in the 1940s really were being put into gas chambers, the Roosevelt administration didn’t think it urgent to stop the Nazi genocide. FDR’s State Department permitted only minuscule number of Jewish refugees to enter the United States, even as immigration quotas went unfilled. Rarely did Roosevelt denounce the extermination of Jews, and pleas to bomb the Auschwitz death camp or its rail lines were turned down the by War Department — despite the fact that US bombers were already flying over the area.

The Roosevelt administration’s feeble response to one of history’s most horrific mass-murders was not atypical. From the Armenian holocaust early in the 20th century to the staggering butchery of the Second Congo War in the 21st, US policymakers have consistently declined to see intervention against genocide as (in Kissinger’s words) “an objective of American foreign policy.” When Hutu militias were slaughtering Rwandans by the hundreds of thousands, Samantha Power wrote in 2001, “the US government knew enough about the genocide early on to save lives, but passed up countless opportunities to intervene.” So unwilling was the Clinton administration to make Rwanda a priority, she noted, that “even as, on average, 8,000 Rwandans were being butchered each day, US officials shunned the term ‘genocide’ for fear of being obliged to act.”

As a candidate for president in 2000, George W. Bush was asked about the American failure to intervene in Rwanda. “I think the administration did the right thing in that case,” he answered, even though “it was a horrible situation.”

Seven years later, another presidential candidate was asked whether he would keep US troops in Iraq if he knew that withdrawing them could trigger a bloodbath. Barack Obama’s answer, the AP reported, was that America “cannot use its military to solve humanitarian problems and that preventing a potential genocide in Iraq isn’t a good enough reason to keep US forces there.”

Of course all these cases were more complex than a brief mention can convey. And of course US foreign policy, under presidents from Nixon to Obama, has accomplished enormous good in the world — including, at times, the saving of many lives.

Yet the good America has done is dwarfed by the good America could have done. Too often we have been willing to disregard unspeakable evil in the mistaken belief that preventing atrocities is not “an American concern.” Kissinger’s words to Nixon that day in 1973 were repellent. The mindset behind them has been all too common.