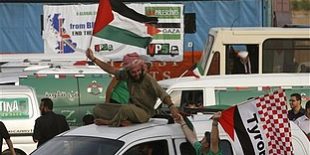 Members of Congress are warning that American funding of the Palestinian Authority could be threatened by efforts to advance a unilateral declaration of statehood.

“Pursuing a non-negotiated path to statehood is a fool’s errand. Palestinians want a state, not a declaration. Their only way to achieve that is through direct negotiations with Israel,” California Democrat Howard Berman, chairman of the House Foreign Affairs Committee, told The Jerusalem Post on Monday.

“If they try to circumvent negotiations, they’ll lose the support of a lot of people like me, and it will jeopardize their foreign aid as well,” he said.

Berman’s concerns are shared by Florida Republican Ileana Ros-Lehtinen, who is currently the committee’s ranking member and will take over its stewardship when the GOP assumes control of the House in January.

“The ranking member has long said that US assistance to the PA should be conditioned on the PA living up to its obligations to stop violence against Israel and recognize Israel’s right to exist as a democratic, Jewish state, among others that it has demonstrably failed to live up to,” Ros-Lehtinen spokesman Brad Goehner said. “These unilateral efforts serve to undermine the prospects that those obligations might finally be met.”

Members of the US House of Representatives are also circulating resolutions criticizing any Palestinian move toward a unilateral declaration of statehood.

While Ros-Lehtinen has co-sponsored a resolution “reaffirming congressional opposition to the unilateral declaration of a Palestinian state,” Capitol Hill sources said Berman will be introducing a new resolution by the end of the week to strengthen the point.

The congressional opposition to a possible unilateral declaration, which certain Palestinian leaders have threatened to put before the UN, has been intensified in the wake of Brazil and Argentina recognizing a Palestinian state within the pre-1967 lines in recent weeks.

It also comes as Republicans are soon to take over the House, with an agenda of cutting spending and reducing the US federal budget. Aid to the PA had already been seen as vulnerable, but having Democrats also criticize the PA highlights the fragility of the funding.

At the same time, with peace talks foundering, the US has indicated its intentions to redouble its efforts to assist Palestinian state-building as one of the major prongs of its new policy aimed at reigniting talks.

“The United States is continuing our efforts to support this important work,” Secretary of State Hillary Clinton stressed at the Saban Forum on Friday night, referring to Palestinian state- and institution-building led by PA Prime Minister Salam Fayyad. The Obama administration has asked Congress to approve $200 million in funding for the PA next year.

Doing so would mean continued funding from Congress, if not increasing the amount. That reality also sobers some legislators who oppose unilateral PA actions but would like to further the American efforts.

“Entirely cutting aid to the Palestinians is not helpful to the peace process, even if it’s politically expedient,” said one aide to a Democratic member of Congress on the foreign operations appropriations subcommittee, suggesting that members will be mindful of that reality. “But the Palestinians have to understand there’s going to be a cost for these reckless unilateral measures.”

He suggested that conditioning the aid on Palestinian rejection of a unilateral course was a middle ground that might satisfy many House members.

Ghaith al-Omari, the director of advocacy for the American Task Force on Palestine, ruled out unilateralism as an effective means to statehood for Palestinians, and said members of Congress should look at what’s happening on the ground in terms of Fayyad’s work when deciding whether to cut off funding.

“We should weigh the advantages being created for Israel and the United States by the security and political developments and the actions of the prime minister himself, and not punish him and his project for the behavior of some irresponsible Palestinian politicians,” Omari said.