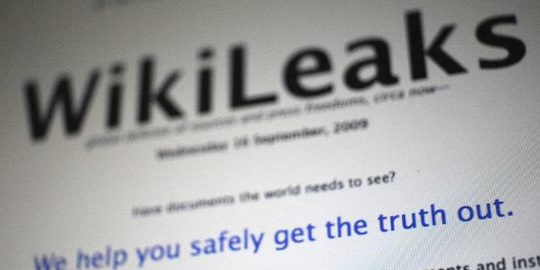 by Caroline B. Glick

Make no mistake about it, the ongoing WikiLeaks operation against the US is an act of war. It is not merely a criminal offense to publish hundreds of thousands of classified US government documents with malice aforethought. It is an act of sabotage.

Like acts of kinetic warfare on military battlefields, WikiLeaks’ information warfare against the US aims to weaken the US. By exposing US government secrets, it seeks to embarrass and discredit America in a manner that makes it well neigh impossible for the US to carry out either routine diplomacy or build battlefield coalitions to defeat its enemies.

So far WikiLeaks has published more than 800,000 classified US documents. It has exposed classified information about US operations in Iraq and Afghanistan and it has divulged 250,000 diplomatic cables.

One of the most distressing aspects of the WikiLeaks operation is the impotent US response to it. This operation has been going on since April. And the US had foreknowledge of the attack in the weeks and months before it began. And yet, the US has taken no effective steps to defend itself. Pathetically, the most it has been able to muster to date is the issuance of an international arrest warrant against WikiLeaks spokesman Julian Assange on rape charges in Sweden.

The US has not taken down the website. Aside from the US Army soldier Pfc Bradley Manning who leaked most of the documents to the website, no one has been arrested. And the US appears impotent to prevent the website from carrying through on its latest threat to publish new documents aimed at weakening the US economy next month.

Neither US President Barack Obama nor any of his top advisers has had anything relevant or useful to say about this onslaught. Defense Secretary Robert Gates assured journalists that the damage caused by publishing US operations on the battlefield, classified reports of meetings with and assessments of foreign heads of state and other highly sensitive information will have no long lasting impact on US power or status.

Ignoring the fact that the operation is aimed specifically against America, Secretary of State Hillary Clinton said it was “an attack on the international community.”

While the expressed aim of the attackers is to weaken the US, Obama’s spokesman Robert Gibbs called them “criminals, first and foremost.” And US Attorney-General Eric Holder said he’s checking the law books to figure out how to prosecute WikiLeaks personnel.

In spite of the unanimity of the US’s closest Arab allies that Iran’s nuclear installations must be destroyed militarily – a unanimity confirmed by the documents revealed by WikiLeaks – the US has refused to take action. Instead it clings to a dual strategy of sanctions and engagement that everyone recognizes has failed repeatedly and has no chance of future success.

In spite of proof that North Korea is transferring advanced ballistic missiles to Iran through China, again confirmed by the illegally released documents, the US continues to push a policy of engagement based on a belief that there is value to China’s vote for sanctions against Iran in the UN Security Council. It continues to push a policy predicated on its unfounded faith that China is interested in restraining North Korea.

In spite of the fact that US leaders including Gates recognize that Turkey is not a credible ally and that its leaders are radical Islamists, as documented in the classified documents, the US has agreed to sell Turkey a hundred F-35s. The US continues to support Turkish membership in the EU and of course embraces Turkey as a major NATO ally.

The publication of the US’s true feelings about Turkey has not made a dent in its leaders’ unwillingness to contend with reality. On the heels of the WikiLeaks exposure of thousands of documents from the US Embassy in Ankara discussing Turkish animosity towards America, Clinton flew to Turkey for the first leg of what The New York Times referred to as an “international contrition tour.”

There she sucked up to the likes of Turkish Foreign Minister and Islamist ideologue Ahmet Davutoglu, who was kind enough to agree with Clinton’s assertion that the publication of the State Department cables was “the 9/11 of diplomacy.”

THE MOST important question that arises from the entire WikiLeaks disaster is why the US refuses to defend itself and its interests. What is wrong with Washington? Why is it allowing WikiLeaks to destroy its international reputation, credibility and ability to conduct international relations and military operations? And why has it refused to contend with the dangers it faces from the likes of Iran and North Korea, Turkey, Venezuela and the rest of the members of the axis of evil that even State Department officers recognize are colluding to undermine and destroy US superpower status?

The answer appears to be twofold. First, there is an issue of cowardice.

American leaders are afraid to fight their enemies. They don’t want a confrontation with Iran or North Korea, or Venezuela or Turkey for that matter, because they don’t want to deal with difficult situations with no easy answers or silver bullets to make problems disappear.

WikiLeaks showed that there is no Israel lobby plotting to bring the US into a war to serve Jewish interests. There is something approaching an international consensus that Iran is the head of the snake that must be cut off, as the Saudi potentate described it.

Yet that consensus opinion has fallen on deaf American ears for the past seven years. This despite the fact that both the Bush administration and the Obama administration certainly recognized that if the US were to attack Iran’s nuclear installations or help Israel do so, despite all the theater of public handwringing and finger- wagging at Israel, the Arabs and the Europeans and Asians would celebrate the operation.

THE SECOND explanation for this behavior is ideological. The Obama administration will not take concerted action against WikiLeaks because doing so will compromise its adherence to leftist politically correct nostrums.

Those views assert that there is something fundamentally wrong with the assertion of US power and therefore the US has no right to defend itself. Moreover, nothing the Arabs or any other non-Western governments do is a function of their will. Rather it is a function of their response to US or Israeli aggression.

So it is that in the wake of the WikiLeaks disclosures that put paid the fiction that Israel is behind the fuss over Iran’s nuclear weapons program, Juan Cole, the anti-Israel ideologue and conspiracy theorist favored by the Obama administration, published an article in The Guardian proclaiming that Israel is to blame for Saudis’ fear of Iran. If the Arab masses weren’t so worked up over Israeli aggression in Gaza, he claimed, the Saudi leadership wouldn’t have been upset about Iran.

It is this sort of non sequitur that allows the Obama administration to continue pretending that the world is not a hard place and that there are no problems that cannot be solved by pressuring Israel.

So too, Fred Kaplan at Slate online magazine claimed that the leaks showed that the Obama administration’s foreign policy is successful because it succeeded in getting China on board with UN sanctions against Iran. But of course, what the documents show is that China is breaching those sanctions, rendering the entire exercise at the UN worthless.

And the Left’s voice of “reason,” the New York Times editorial page, lauded the Obama administration for its courage in rejecting the pleas of Arab states and Israel and fiddling while Iranian centrifuges spin. According to the Times, true courage consists of defying reality, strategic necessity and allies to defend the dogmas of political correctness.

Perhaps the best way to demonstrate how fecklessly the US is behaving is by comparing its actions to those of Israel, which suffered a similar, if far smaller case of data theft earlier this year.

In April, the public learned that towards the end of her IDF service, a secretary in the office of the commander of Central Command named Anat Kamm copied some 2,000 highly secret documents onto her zip drive. After leaving the army she was hired as a reporter by the far-left Walla news portal, which was then partially owned by the far-left Haaretz newspaper. Kamm gave the documents she stole to Haaretz reporter Uri Blau, who began publishing them in November 2008.

Haaretz used its considerable power to discredit the investigation of Kamm and Blau by falsely telling foreign reporters that the story was an issue of press freedom and that Kamm was being persecuted as a journalist rather than investigated for treason she committed while serving in the military.

In the face of the predictable international outcry, Israel stuck to its guns. Kamm is on trial for stealing state secrets with the intent of harming state security and Blau, who fled to London, returned to Israel with the stolen documents.

While there is much to criticize in Israel’s handling of the case, there is no doubt that despite its international weakness, Israeli authorities did not shirk their duty to defend state secrets.

THE FINAL irony of the WikiLeaks scandal is the cowardice of WikiLeaks that stands at the foundation of the story. Founded in 2006, Wikileaks was supposed to serve the cause of freedom. It claimed that it would defend dissidents in China, the former Soviet Union and other places where human rights remains an empty term. But then China made life difficult for WikiLeaks and so four years later, Assange and his colleagues declared war on the US, rightly assuming that unlike China, the US would take their attacks lying down. Why take risks to defend dissidents in a police state when it’s so much easier and so much more rewarding to attempt to destroy free societies?

Assange and company are hardly the first to take this course. Human Rights Watch, created to fight for those crushed under the Soviet jackboot, now spends its millions of George Soros dollars to help terrorists in their war against the US and Israel. Amnesty International forgot long ago that it was founded to help prisoners of police states and instead devotes itself to attacking the imaginary evils of the Jewish state and Western democracies.

And that brings us to the real question raised by the WikiLeaks assault on America. Can democracies today protect themselves? In the era of leftist political correctness with its founding principle that Western power is evil and that the freedom to harm democracies is inviolate, can democracies defend their security and national interests?