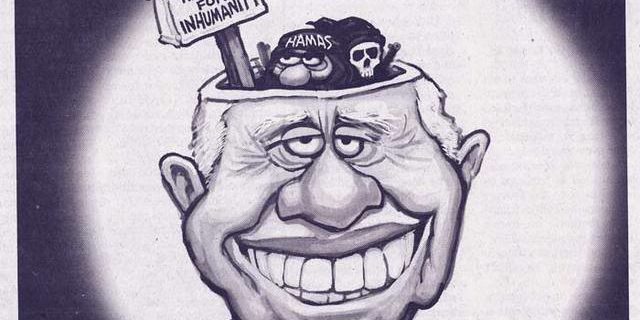 Even as Islamic Hitlerites gather in Iran to deny the first Holocaust of the Jews and to plot the second, former president Jimmy Carter tours America with a new book that describes Jews as racists and oppressors, and suggests they are also a conspiratorial mafia that intimidates “critics,” controls America’s media and war policy, and are therefore also the source of Islamic terrorism and the Arabs’ genocidal campaign to eliminate them from the map of the Middle East.

In other words, Americans beware of the Jew in your midst.

Here is Carter’s description of the Middle East conflict in his own words, delivered during an interview he gave on National Public Radio during the second day of the Holocaust deniers’ conference in Teheran:

“I have spent a lot of time in Palestine in recent years. … The Palestinians have had their own land, first of all, occupied and then confiscated and then colonized. They’ve been excluded from their own gardens and fields, and pastures and churches. They have been severely restrained in their movements. They have to have different kinds of passes to go through different checkpoints inside their own lands on their own roads. The Israelis have built more than 200 settlements inside Palestine.They connect these settlements with very nice roads for the Israeli settlers, and then superhighways and so forth going into Jerusalem. Quite often the Palestinians are prevented from even riding on those roads that have been built in their own territory. So this has been in many ways worse than it was in South Africa.”

When hundreds of millions of Muslims are calling for the extermination of the Jews of Israel this is more than a lie; it is a blood libel.

It is a lie that Palestinians “had their own land, first of all, occupied.” This is like saying that Texans had their own land occupied by Hispanics, ignoring the fact that Hispanics were there first. The very word Palestine is a Roman appellation for the people called Philistines, who were not Arabs but red-haired sailors from the Aegean. The Jews were there as well.

In short, first of all the Jews were in the land before the Arabs.

Second of all, the Arabs who inhabited the Palestine Mandate in 1948, at the time of the creation the state of Israel, considered themselves Syrians.

It was not taken from the Turks by the Jews, but by the British and the French. They took it because Turkey sided with Germany in the First World War and, of course, lost. The Turkish empire had ruled the entire region including Syria, Lebanon, Iraq and Jordan for four hundred years before Syria, Lebanon, Iraq and Jordan were artificially created by the English and the French. Jordan – a state whose majority is Palestinian – occupies 80% of the Palestine Mandate.

So it is a preposterous lie to say that the Palestinians had their own land and that it was occupied by the Jews.

Fourth, the individual plots of land that Jews now own were in the first instance bought from the Arabs who regarded themselves as Syrians and who lived in the area of Israel. The only property that was confiscated was confiscated as a spoil of the aggressive war that five Arab states waged against Israel from the day of its birth. Five Arab armies invaded Israel, a sovereign state, with the declared intent of “pushing the Jews into the sea.” The cry today of the Muslim majority in the Middle East is to “liberate Palestine from the river to the sea.” In other words push the Jews into the sea.

By the standards of occupation and legitimacy Jimmy Carter invokes, Israel has more legitimacy as a Jewish state than Texas does as an American state, rather than a Mexican province.

The fifth Jimmy Carter lie in this lone Jimmy Carter sentence is the claim that the Jews have colonized anything. “The Israelis have built more than 200 settlements inside Palestine.”

Why is it wrong of the Jews to live in the West Bank? (The 7000 Jews of Gaza, of course, have already been expunged as result of the Arabs’ genocidal hate.) Why can’t Jews have settlements in the West Bank?

The answer is because the Palestinians Arabs are filled with a racist and theocratic hate towards the Jews. They can’t tolerate a non-Muslim, non-Arab people –however small a minority — living in their midst. (The 7000 Jews of Gaza – out of a population of 1.2 million – were law-abiding and peaceful and created a horticultural industry that produced ten percent of Gaza’s gross national product. But they were Jews. And that was intolerable to Palestine’s Nazis. So they had to be removed.)

Contrast Carter’s attack on Jews living in the West bank as “colonizers” who must be expelled with the fact that more than a million Arabs live in Israel, where Israel provides them with more rights – including the right to vote and elect Arab members of Israel’s government – than any Arab who lives in any Arab state in the Middle East.

It is because too many Palestinians have shown themselves to be bloodthirsty, murderers who have been indoctrinated by their religious leaders and their government to believe in a sick Islamic fantasy that it is their Muslim duty to kill Jews by blowing themselves up; and that, if they do so, they will go to heaven along with 70 members of their family; and, that, if they are lucky enough to be male they will be rewarded by 72 virgins on the other side.

On this side they will be regarded as martyrs and saints and honored by their government. Sixty-percent of Palestinians support suicide bombing and this sick, genocidal agenda – which is shared by all members of the Palestinians’ democratically elected government – to kill the Jews.

To ignore these facts and to invert them, as Jimmy Carter does, is to mark yourself as a moral defective.

To take on as a mission the spreading of lies that enable Islamic Nazis to carry out their final solution is the epitome of the evil that America’s fifth column left and its reprehensible ex-President represent in our time.