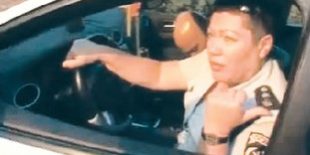 Haifa Mayor Yona Yahav said “you were always on the front line,” in remarks at Tomer’s funeral in the military cemetery in Haifa on Monday.

“You were assertive and you showed love, living up to your name Ahuva (beloved).”

The Israel Police is in mourning over Haifa Police Chief Asst.-Cmdr. Ahuva Tomer, who succumbed to her severe burns injuries on Monday morning, 4 days after rushing into an inferno in the Carmel mountains to try and rescue passengers on-board an Israel Prison Service bus that had been trapped in the flames near Kibbutz Bet Oren.

Tomer was being laid to rest at the Haifa military cemetery, and was accompanied by hundreds of police officers, relatives and friends.

Police Insp.-Gen. David Cohen received word of Ahuva’s death while travelling the South to visit seven bereaved IPS families who lost loved ones in the fires.

“Ahuva, our friend, distinguished commander, brave and iron woman who stood the difficult test of fire and rose to the challenge, lived and died as a hero. The whole of the Israel Police family is stunned with grief, and is hurting today,” Cohen said.

Cohen and the remainder of the police brass were attending Tomer’s funeral.

During her rescue attempt on Thursday, Tomer continued to issue commands over her field radio until she became trapped in the blaze, and the commands became urgent cries for assistance. By the time rescuers reached the senior commander, she was badly burned.

After being rushed to the hospital, medical teams spent two hours resuscitating her, and then transferred her to the specialist burns unit at the Rambam Medical Center. .

Tomer has consistently made headlines as a ground-breaker in the Israel Police.

In 1997, Tomer became the first female commander of an Israel Police station, taking command of police in the northern city of Nahariya. In December 2006, she became the first female district-level operations commander in the Israel Police, serving as operations commander in the Northern District. The Northern District is comparable to the Northern Command in the IDF, and no woman in the IDF or in the police had held such a high rank in the field of operational command.

Less than three years later, she again made history when she was appointed to lead the large Haifa police station, and became the first woman to command a station with over 500 police under her direct command.

Tomer often downplay her accomplishments, and shortly after her history-making appointment in 2006, she told The Jerusalem Post that she did not see the promotion as exceptional.

“I have frequently been the first woman to hold the position in almost all of the positions that I have held in the police,” she explained. “I don’t feel like I’m special. I do function in a predominantly male society, but I am an equal among equals and I try to be the best I can. But women need to understand that this is not just a question of equality of opportunity, but also equality of responsibility.”

President Shimon Peres was among those who eulogized Tomer on Monday, calling her “the best of the best” and “a symbol of courage”. She was an example to all, he declared. She never had to raise her voice to the 550 police under her command, Peres continued. “She was loved and admired, and she devoted her life to Israel.”

“She was always a willing listener to others – not only to the men and women under her command, but also to prisoners. She paved her own path to success, and worked tirelessly to eradicate crime,” the president added.

Tomer was captured on camera minutes before the tragedy, driving together with an officer toward the blaze, telling reporters that she was on her way to check first-hand what the situation was in the Carmel Forest. Seconds before she sped off in her police car, Tomer expressed concern for mothers and children in nearby Kibbutz Beit Oren, who were being evacuated.

Public Security Minister Yitzhak Aharonovitch said, “Ahuva was a symbol and a model for police officers. A true woman of valor, esteemed officer, she was a policewoman in every bone in her body.”