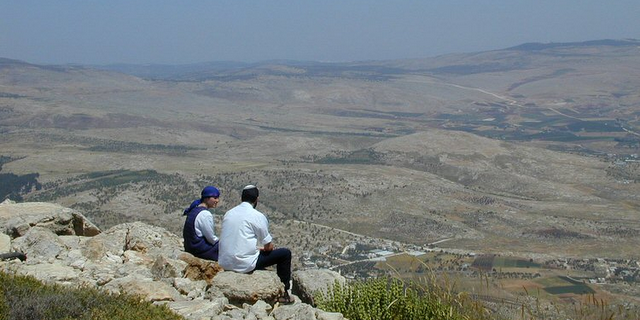 by Jamie Glazlov, Frontpagemag.comFrontpagemag.com interviewed  Michael Gottlieb, an oleh (immigrant) from the US who is a man on a mission. After moving from New York’s suburbia to Israel’s bucolic Samarian (Shomron) heartland region, he has joined the battle to save the Land of Israel in general and the Shomron in particular.  His weapon of choice: his “Shomron Central” hasbarah blog.”

I would like to follow up a bit on our recent interview, The Dire Importance of Samaria.

Let’s start with Israelis’ lack of awareness, understanding and appreciation for their Shomron heartland. What are the consequences?

Gottlieb: It is true that most Israelis today are painfully unaware of the unique asset they have in Samaria. They haven’t been exposed to the immense strategic value of the Samarian mountain ridges, the important depth it adds to their tiny country, nor the crucial airspace it provides overhead. No one’s telling them about the Samarian Mountain Aquifer, Israel’s largest and most significant source of fresh water. They don’t realize how much cheap land and affordable living space is available out there, how close it is to the big cities nor do they have a clue that by Biblical, historical and legal right, it’s all theirs.

The consequences of all this are obvious. If the vast majority of Israelis don’t appreciate what they have in the Shomron; if they don’t understand its multi-faceted importance for the Jewish State; its people; its identity; and its future, then they can’t value it and they can be persuaded to give it away. What should be non-negotiable becomes negotiable. And that is what we’re seeing today. The Israeli government, with the support of many Israelis, is on the verge of capitulating to world pressure because they don’t understand why they should be saying “No”.

FP: Samaria is so close to Israel proper, yet most Israelis never venture there. Why is that?

Gottlieb: The violence of the second Intifada spooked many Israelis, and they have become conditioned not to visit and explore the Shomron, despite the fact that the security situation has improved substantially. Also, the Shomron tourism industry is underdeveloped and way below its true potential and thus is not the tourist attraction that it can and should be.

But most of all, Samaria is off most Israelis’ radar screens. It’s not on their list of places to visit, move to or vacation at. They probably don’t know anyone who lives there. It may be in their backyard, but it’s not in their consciousness. And that, I believe, is the result of a decades-long concerted effort by the political Left, their media accomplices, the intelligentsia and cultural elite to spread lies and hide the truth about the Shomron from the people. Because if the people knew the truth, they would act on it, and that’s very scary for the Left. That is a key point that my blog tries to make. Indeed, its tagline is “Samaria – Israel’s Hidden Asset“. Having said that, there are encouraging signs of an awakening. Some Israelis are finally beginning to discover the treasure that lies east of the Green Line, thanks to some grassroots PR efforts.

FP: Expand a bit more on why Israelis know so little, if anything, about the Shomron.

Gottlieb: Most Israelis have little or no involvement with Samaria because their paths rarely lead there and because no one is seriously promoting it. Probably the extent of most Israelis’ interaction with the Shomron is the army service they periodically do there. When Samaria is mentioned, it’s usually something negative, thanks to the media’s biased and selective reporting. Again, it is my opinion that the people are being fed misinformation and being kept in the dark. There is definitely a story to be told, but it’s being suppressed.

FP: You write about the “War of Ideas.” Tell us what you mean by this term.

Gottlieb: The great debate over whether or not Israel’s sovereignty should extend from the Mediterranean Sea to the Jordan River (“Greater Israel”) has been raging ever since Israel captured Judea and Samaria in the defensive war of 1967. Each side has been battling the other to win over public opinion and to control the narrative. It is a war in every sense of the word because sometimes ideas can determine an outcome in ways that guns can’t.  It’s now clear that the Arabs and the Left have been the hands-down winners in this War of Ideas because in 43 years they have managed to transform Israel’s image from being the heroic underdog David just trying to survive to the child-killer Goliath, usurper of other people’s land. The truth matters little. It’s what people believe that counts. And today most people believe that Israel must withdraw to indefensible borders. The Left is on the verge of defeating Israel in a way that Arab aggression couldn’t. This is the great challenge facing the Right today.

FP: Your thoughts on the Mideast peace process and its assumptions?

Gottlieb: The peace process has been stumbling along for nearly 20 years now and has accomplished nothing except to make the prospect of peace as remote as ever. Beginning with the 1991 Madrid Conference, the fatal flaw of the Mideast peace process has been that it’s based on an erroneous premise, namely that the region can find a lasting peace if only Israel gives up land. It is based on the assumption that the dispute is about land and about borders. It’s not. It’s about any Jewish presence in the land. The Arabs themselves make that very clear. As far as they’re concerned, it’s either us or them. We must face the truth – the emperor has no clothes and we should stop with the charade. The Two State Solution is unworkable.

We need to go back to the drawing board and start from scratch. Rescind Oslo. Dissolve the PA. Apply Israeli law to all of Judea and Samaria and destroy the terrorist infrastructure there. Then, from the various existing alternative peace plans we must select one which gives Israel sovereignty throughout Judea and Samaria while providing the local Arab population with certain basic rights including limited voting rights. This would give Israel the defensible borders it needs while providing the local Arab population a higher standard of living.

FP: Israel survived for its first 19 years (1948-1967) without the Shomron. Why can’t she relinquish it now and continue on without it?

Gottlieb: The fact that Israel survived its first 19 years with “Auschwitz Borders”, to quote Abba Eban, doesn’t mean she should go back to them. During those years Israel endured regular fedayeen terror attacks from Jordan which forced her to retaliate. It’s also appropriate to mention here that the Green Line is not, nor ever was, a border, but merely the non-binding 1949 cease-fire line. An international border corresponding to the Green Line is indefensible and a recipe for a future war.

FP: A careful reading of your blog shows deliberate use of terminology. Why is your choice of words so calculated?

Gottlieb: Words and semantics are the weapons of choice in the Left’s War of Ideas. This is how they get their ideas into our heads, through the back door. Their carefully chosen terms are calculated and designed to discredit and delegitimize any Jewish presence in Judea and Samaria. It’s important to understand that their vocabulary is their propaganda. Terms such as “settler”, “Palestinian”, “occupation” are all loaded with meaning, all in the service of furthering their agenda. Their use of “West Bank” or “territories” to define Judea and Samaria, the lands east of the Green Line is a perfect example. These bland, nondescript terms effectively “cleanse” away any historical meaning that this ancestral homeland has for the Jewish People. It erases 3800 years of Jewish history. Through terminology, they try to dispossess the Jews of their natural and legal rights to the land. Unfortunately, it’s working.

Similarly, my blog is written with the same deliberate use of terminology to convey the message that the Jewish People have exclusive rights to their homeland.