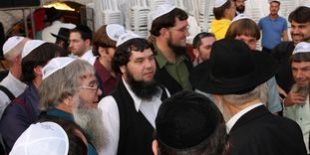 Representatives of the Amish community from the United States and Switzerland paid a visit to the Western Wall on Saturday night, where they asked the Jewish people’s forgiveness for their group’s silence during the Nazi extermination of Jews in the Holocaust.

Part of what made the visit special was that the Amish, a sect of the Mennonite Church that largely rejects modern technology, do not normally use contemporary forms of transportation such as the aircraft on which they made the journey to the Holy Land.

But according to an announcement issued by the office of Western Wall Rabbi Shmuel Rabinovitch, with whom the group met, the Amish delegates saw great importance in coming to Israel and expressing their contrition, as well as declaring their unreserved support of the Jewish people and the State of Israel.

The delegation members stressed that they were neither seeking any kind of gesture from the Jewish people nor looking to proselytize – only to support Israel for the simple reason that in the past they hadn’t.

Rabinovitch was presented with various tokens at a ceremony in the Hasmonean chamber, including a parchment with a request for forgiveness in the name of the entire Amish community, along with a commitment that from now on, it would loudly voice its support of the Jewish people, especially in the wake of the expressions of hatred by Iranian President Mahmoud Ahmadinejad and his extensions.