What the US is proposing 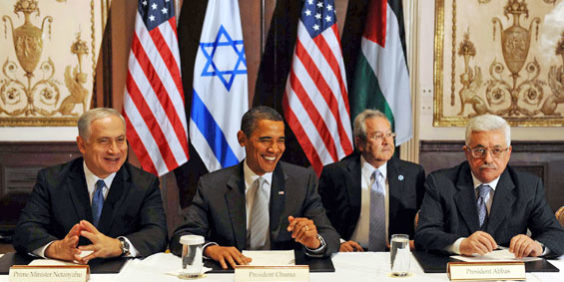 Prime Minister Binyamin Netanyahu told ministerial colleagues on Sunday that the terms of a planned US-Israel accord, aimed at creating the climate for resumed direct talks with the Palestinians, have not been finalized.

The clauses below represent most of the likely components.

Netanyahu is set to seek approval for such an accord from the 15-member security cabinet.

■ Israel is to freeze all new building in West Bank settlements – but not eastern Jerusalem – for another 90 days, with a US pledge that no further freeze will be sought.

■ The US will use the pledged freeze to draw the Palestinians back into direct talks. (The Palestinians have stated that they want a freeze on all “settlement” construction, including in east Jerusalem.)

■ The freeze is to run from 90 days after approval, but also be retroactive to September 26, when the previous moratorium expired.

As such, it would cover all new construction in West Bank settlements since September 26, including projects that were frozen during the first moratorium, extending all that first moratorium’s details and amendments, and presumably prohibiting local councils and municipalities from issuing construction permits.

■ At resumed talks, Israel is to immediately begin substantive discussions with the Palestinians on the border between Israel and a future Palestinian state, as well as other core issues, along the lines of the talks that began in Washington in September.

In a joint statement with Prime Minister Binyamin Netanyahu on Thursday, Secretary of State Hillary Clinton said, “The United States believes that through good-faith negotiations, the parties can mutually agree on an outcome which ends the conflict and reconciles the Palestinian goal of an independent and viable state, based on the 1967 lines, with agreed swaps, and the Israeli goal of a Jewish state with secure and recognized borders that reflect subsequent developments and meet Israeli security requirements.”

■ The US is to intensify discussions with Israel on a wide-ranging bilateral security agreement, to include clauses alleviating some of the risks involved in a future Israeli-Palestinian accord, possibly including US support for the deployment of Israeli troops in the Jordan Valley.

■ The US will use its veto in the UN Security Council against unilateral efforts for Palestinian statehood and other proposals aimed at delegitimizing Israel or preventing it from exercising its right to self-defense. The US would also oppose such efforts in other UN and international forums.

■ The US will support Israel if is targeted over the issue of nuclear capacities in forums such as the International Atomic Energy Agency.

■ The US would give Israel 20 F-35 joint strike fighter jets, worth $3 billion, in addition to the 20 that Israel has ordered and is paying for. This offer, aimed at maintaining Israel’s qualitative edge, would be in addition to existing US-Israel defense agreements.