Canada, a steadfast supporter of Israel 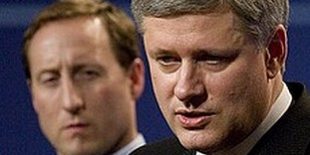 Canada will remain a steadfast supporter of Israel even if it means losing stature internationally, Prime Minister Stephen Harper said.

Addressing a three-day conference in Ottawa on battling global anti-Semitism, Harper said Monday that “when Israel, the only country in the world whose very existence is under attack, is consistently and conspicuously singled out for condemnation, I believe we are morally obligated to take a stand.”

In what was described as an embarrassing blow to Harper and his Conservatives, Canada recently lost a bid for a seat on the United Nations Security Council — a defeat attributed in part to Ottawa’s staunch backing of Israel.

Harper told parliamentarians and experts attending the conference that he has “the bruises to show for it, that whether it is at the United Nations or any other international forum, the easiest thing to do is simply to just get along and go along with this anti-Israeli rhetoric, to pretend it is just about being even-handed and to excuse oneself with the label of ‘honest broker.’

“But as long as I am prime minister, whether it is at the UN or the Francophonie or anywhere else, Canada will take that stand, whatever the cost. Not just because it is the right thing to do  but because history shows us, and the ideology of the anti-Israeli mob tells us all too well, that those who threaten the existence of the Jewish people are a threat to all of us.”

Parliamentarians and experts from more than 40 countries are in Ottawa until Tuesday for the gathering, a follow-up to the inaugural conference of the Interparliamentary Coalition for Combating Anti-Semitism held last year in London.

In his address to the conference, Harper described a new kind of anti-Semitism that “targets the Jewish people by targeting the Jewish homeland, Israel, as the source of injustice and conflict in the world and uses, perversely, the language of human rights to do so.”

“We must be relentless in exposing this new anti-Semitism for what it is,” the Canadian leader said.