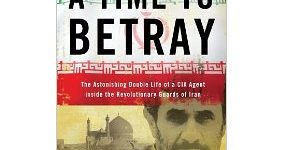 Speaking from an undisclosed location, with his voice digitally altered to protect his true identity, former Iranian Revolutionary Guard Reza Kahlili told Israel National Radio’s Yishai Fleisher that Iran would not hesitate to use nuclear bombs against Israel.

“ will use the nuclear bomb against Israel, they will use it against Persian Gulf countries, and they will use it against Europe to bring about that last hadith (Islamic commentaries on sayings and activities of Mohammed and his companions) that calls for total chaos, lawlessness, and havoc in the world, which creates the circumstance for Imam Mahdi (the Islamic messianic figure) to appear.”

Kahlili bemoaned the oppression of the Iranian people by their government, and told Fleisher about the circumstances which made him leave the Revolutionary Guards and become a spy against them for the American CIA. His new book, “A Time to Betray: The Astonishing Double Life of a CIA Agent inside the Revolutionary Guards of Iran”, details his experiences fighting against a regime he says is tyrannizing his people.

Kahlili (whose real name is hidden from the public for fear of reprisals against him and his family) grew up in Tehran in an upper-middle class family. Educated in the United States in the early 1970’s, Kahlili – like many Iranians during that dramatic time – returned to Iran after the Islamic revolution of 1979 to help build his country.

“During the Shah era (prior to the Revolution)… it was a very open society. Muslims, Christians, and Jews. They enjoyed each other, the community was a happy community, and everybody was free to pursue their goals and take advantage of opportunities provided. Iranians were wealthy…there was laughter and joy, and I’ve reminisced about those times many times,” said Kahlili.

But discontent brewed in the society. “The only thing lacking at that time was political freedom, freedom of speech… Sometimes people were taken to prison and tortured – but nothing like what goes on today in Iran,” said Kahlili. “But that was the weakness of the Shah. Perhaps we didn’t understand the limitations of the era we were living in, but people wanted more.”

When the revolution took place with overwhelming public support, Kahlili believed it would increase freedom and democracy amongst the people. He decided to return to Iran. At the recommendation of a childhood friend, he joined the Iranian Revolutionary Guard, an ideological militia with a generalized power in the army and amongst the populace.

Despite its reputation for extremism and cruelty, Kahlili says the average Guard member was an ordinary worker who showed up on time, chatted with co-workers, did his work, and went home at the end of the day. “However,” he said, “there were radicals – the minority in the Guards – who would do anything, including torture, rape and kill anybody who opposed the regime, including members of the Revolutionary Guard themselves. If anyone was found to be in any way active… against the regime, they would be taken to prison and horrible things would be done to them.”

Ayatollah Ruhollah Khomeini’s regime veered sharply away from the westernized country the Shah had fashioned, becoming a stern Islamic republic with a theocratic constitution. The brutality with which the Supreme Leader’s dictates were carried out soon began to disillusion Kahlili.

“The Ayatollah was imposing his will on the people and had lied to them,” said Kahlili. He described one scene at Evin Prison in northwest Tehran which so disgusted him that he decided he must do anything he could to bring down the regime upholding these practices.

It was too much to bear for Kahlili. “I was shocked, I was horrified, and totally heartbroken and wanted to do everything I could possibly do to bring down this vicious regime, and that’s when I decided to travel to the United States.” Kahlili ultimately made contact with the CIA, which utilized him to provide information on schemes of the Revolutionary Guard and associated terror organizations. Over the years, he provided information about Iranian payments to Palestinian suicide groups.

Today’s Iran is essentially the same as that of the Ayatollah, according to Kahlili. President Ahmadinejad portrays himself as a folk leader in the country to garner support, an Islamic leader who will bring freedom to the oppressed. “The fact of the matter is that they have oppressed and suffocated, raped, tortured and killed thousands of Iranians just to stay in power,” said Kahlili. “They are the most brutal dictators that the world has ever seen, and they are vicious, and they care less about the well-being of the Palestinian people or others…They are not the defender of the oppressed, they are not concerned with the well-being of the Middle East, they are post-modernist killers.”

Kahlili also noted that despite Ahmadinejad’s fierce anti-Semitism and personal desire to eradicate Israel, the average Iranian does not hate Jews. “Before the Revolution, we had many Iranians who were Jews, and there were many marriages between Muslims and Jews. The Iranians do not look at Jews, the Iranians do not look at Israelis the same way as the Iranian government.” Kahlili said. “ would welcome anybody – they would welcome Israel – to help them get rid of this regime.”