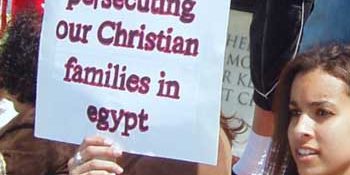 Egypt has parliamentary elections coming up next month and an important presidential election next year. As with similar regimes throughout history, the current rulers of Egypt need a scapegoat to take the voters’ attention off its disastrous social and economic policies (after all, rigging elections is so tedious).

Unfortunately for Egypt’s 10 million Christians, they are the perfect scapegoat in an increasingly radicalized Muslim society.

To stir up the public against the Christians, Egyptian Muslim clerics and media outlets have circulated a claim that the nation’s Coptic Christian minority is importing weapons from Israel in preparation for an assault on Egypt’s Muslims.

The claim originated on the pan-Arab satellite news network Al Jazeera, which ensured that just about every Egyptian Muslim, if not ever Middle East Muslim, was aware of the unfounded assertion that Egypt’s Christians were preparing for war with the aid of the hated “Zionist entity.”

Speaking on Al Jazeera on September 15, prominent Egyptian Muslim cleric Mohammed Salim al-Awwa declared that Egyptian Christians were “stocking arms and ammunition in their churches and monasteries – arms imported from Israel, no less, as Israel is at the heart of the Coptic Cause – and are preparing to wage war against Muslims.”

Other reports have included rumors that the Christian assault has already begun, and that Christian women who have converted to Islam are being kidnapped and tortured by the Copts.

Since those reports first started circulating last month, the Barnabas Fund, an organization that provides assistance to persecuted Christian communities, says that at least 10 large Muslim demonstrations against Christians have taken place in Egypt.

At least one Muslim group is calling for a “bloodbath” to be perpetrated against the Christian minority.

Further inflaming Muslim passions was an official Egyptian government body’s insistence that the Coptic Church formally apologize after one of its clergymen criticized a verse from the Koran that refers to Christians as “infidels.” The leader of the Coptic Church, Pope Shenouda III, promptly apologized, but the Muslim anger was not appeased.

Raymond Ibrahim, associate director of the Middle East Forum and a regular lecturer at the National Defense Intelligence College in Washington, DC, believes Egyptian President Hosni Mubarak, held aloft by the West as the Middle East’s most “moderate” Arab leader, is behind the anti-Christian sentiment.

“Recent events indicate that the Mubarak regime is intentionally inciting Egypt’s Muslims against the Copts,” Ibrahim wrote for the Hudson Institute. “Not only has it not prevented or dispersed the increasingly rabid demonstrations against the Copts…but Egyptian security…actually facilitates, and sometimes participates in, these mass demonstrations.”

Ibrahim explained that the more secular Mubarak regime, which the aging and ill leader wants his son to take over, has only remained in power for so long thanks to an unwritten agreement with Egypt’s Islamist factions. Those factions are permitted to control the media, eduction and other government administration, and in return Mubarak’s rule is not too hotly contested.

Another Egyptian writer, Youssef Ibrahim, notes that “as part of the deal, Mubarak agreed to feed Egypt’s Christians to the growing Islamic beast.”

Raymond Ibrahim concluded is piece by lamenting that “as Egypt reverts to its medieval character, the Copts find themselves again in a period of severe persecution.”

Tellingly, the international media has almost completely ignored this story, while not failing to provide prime headline real estate whenever Israeli Jews build a few houses that upset the Palestinian Arabs.

That the construction of Jewish apartments can result in emergency UN meetings, official condemnations and weeks of front page news, but the persecution and potential slaughter of Egypt’s Christians cannot is evidence that the international community’s motives are not truly humanitarian in nature.