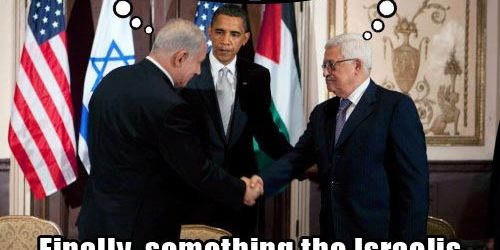 George Mitchell, President Obama’s special envoy, is testing Prime Minister Netanyahu: Has he learned from past errors by repeating them – which would demolish his credibility – or by avoiding them, which would resurrect his domestic and international clout?

In order to enhance his own clout and Israel’s posture of deterrence – which constitute essential prerequisites to Israel’s national security, Israel’s strategic ties with the US and to the attainment of durable peace – it is incumbent upon Netanyahu to refute Obama’s, Mitchell’s, and Clinton’s assumption that he (Netanyahu) tends to transform red lines into pink lines.

On May 29, 2009 – six months before the freeze on Jewish construction in Judea and Samaria and three weeks before Netanyahu’s “Two States Speech” at Bar Ilan University – the Washington Post reported that Mahmoud Abbas “fully expects that Netanyahu will never agree to the full settlement freeze.” Abbas assumed that it would take a multi-year US pressure to force Netanyahu to publicly accept the two-state formula and to freeze Israeli settlement construction.”

The Washington Post assumed that it is “a Palestinian fantasy that the US will simply force Israel to make critical concessions, whether or not its democratic government agrees, while Arabs passively watch and applaud.” However, Abbas, the Washington Post and Obama have learned that Jerusalem is capable of transforming red lines into pink lines.

In March 2009, upon Netanyahu’s entry into the Prime Minister’s Office, Obama’s team was convinced that he would be susceptible to pressure for a complete freeze of Jewish construction in Judea and Samaria. They dismissed the advice by veterans of President Clinton’s team to refrain from such pressure, lest Netanyahu defy the pressure, while enjoying the support of most Americans and most legislators, thus dragging Obama into a losing proposition. However, they found out that Jerusalem could transform red lines into pink lines.

Netanyahu’s first 18 months in office demonstrated that submission to pressure intensified pressure, radicalized Arab expectations and demands, undermined Israel’s moral standing, eroded the PM’s image and the strategic posture of the Jewish State in the Middle East and in Washington, DC and weakened the conviction of Israelis in their own cause.

In contrast, the eight years of Prime Minister Shamir in office were top heavy on US resentment of his steadfastness and defiance. Washington opposed Shamir’s policy toward the Palestinians, but respected his principle-driven policy and his capability to withstand domestic and external pressure. On a rainy day, Shamir was a unique strategic ally in face of regional and global mutual threats, which were significantly more important than the Palestinian issue in impacting vital US interests.

Thus, irrespective of the unbridgeable gap, between the US and Israel, in the narrow context of the Arab-Israeli context, the bilateral strategic cooperation in the wider regional and global context expanded in an unprecedented manner. Jerusalem should have learned that holding on to red lines bolsters Israel’s life line.

Prime Minister Netanyahu crossed the Rubicon on June 14, 2009, publicly endorsing the two-state solution, in order to alleviate Obama’s pressure. However, as expected, the pressure intensified, the Palestinians would not reciprocate and on November 25, 2009, Netanyahu was forced to accept a full freeze of Jewish construction in Judea and Samaria, while Arab construction crossed the charts.

Netanyahu’s retreat adrenalized the veins of Team Obama, which stepped up the pressure, convincing Netanyahu to move the goal posts further, expanding the freeze to Jerusalem.

In September 1997, Palestinian terrorism exploded against the backdrop of the opening of the Western Wall Tunnel. Washington expected a heavy-handed Israeli response, but was astounded to witness a hand-in-hand Netanyahu-Arafat visit to Washington, DC. The 1997 Hebron and the 1998 Wye Accords, the willingness to refrain from construction in Har Homa and Ma’aleh Hazeitim (in Jerusalem) and to sweep under the carpet Abbas’ hate-education and incitement, Holocaust denial and promotion of terrorism have further corroded the credibility of Jerusalem’s red lines.

Will Prime Minister Netanyahu learn from past dramatic errors and their adverse impact upon Israel’s strategic image? Will he substantiate the Washington Post May 2009 assumption that it takes a “Palestinian Fantasy” to assume that a US president can impose upon Israel critical concessions?

Will Netanyahu leverage his own unique intellectual and communications capabilities, Obama’s political vulnerability and heavy constraints, the expected drastic changes on Capitol Hill and the awesome platforms of bi-partisan support of the Jewish State among Americans? Will he leverage the unique commitment to enhanced US-Israel strategic relations by Republicans and Democrats in Congress, which is equal in power to the President in shaping domestic and international policies?