Home truths and One Illusion about Islam 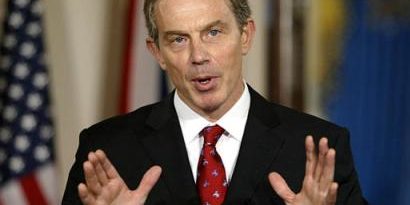 Britain’s former Prime Minister Tony Blair was forced out of office early because, weakened by his backing for the war in Iraq, he refused to condemn Israel for the Lebanon war of 2006. The treatment he received bore ample testimony to the derangement over Israel that has taken hold of Britain, and its corresponding and suicidal failure to grasp the true nature and extent of the threat the west is facing from the Islamic jihad.

Now Blair has returned to the fray. In a speech to the Washington Institute for Near East Policy, he has delivered some desperately needed home truths about the way in which the west is all but handing victory to the Islamists:

The former prime minister said that there had been a failure to challenge the ‘narrative’ that Islam was oppressed by the West which was fuelling extremism around the world.

He said too many people accepted the extremists’ analysis that the military actions taken by the West following the 9/11 attacks were directed at countries because they were Muslim and that it supported Israel because Israelis were Jews while Palestinians were Muslims. ‘We should wake up to the absurdity of our surprise at the prevalence of this extremism,’ Mr Blair said

’Look at the funds it receives. Examine the education systems that succour it. And then measure, over the years, the paucity of our counter-attack in the name of peaceful co-existence. We have been outspent, outmanoeuvred and out-strategised.’

… Mr Blair warned that it was impossible to defeat extremism ’without defeating the narrative that nurtures it’. Moderate Muslims who believed in co-existence and tolerance were, he said, being undermined by the unwillingness of the West to take on the extremists’ arguments.

‘We think if we sympathise with the narrative  — that essentially this extremism has arisen as a result, partly, of our actions — we meet it halfway, we help the modernisers to be more persuasive,’ he said.

’We don’t. We indulge it and we weaken them. Worse, a reaction springs up amongst our people that we are pandering to this narrative and they start to resent Muslims as a whole.’

Absolutely. The west’s appeasement of Islamic extremism has vastly encouraged it, as I have written repeatedly here and in my book Londonistan. But – and it’s a very big but – much of this catastrophic appeasement was going on under Blair’s own premiership. It isn’t clear whether he was implicitly acknowledging this egregious failure on his own watch. To be fair, everyone is entitled to learn from experience – and from things Blair has said recently about the Middle East, it would seem he has been on a sharp learning curve since leaving Number Ten. But it hardly provides much comfort to know that he got it so very wrong in office – and with such terrible consequences.

He was also right about Iran:

‘Go and read the speech of Iran’s president to the United Nations just days ago here in New York, and tell me that is someone you want with a nuclear bomb,’ he said.

A timely and again much needed wake-up call to a Britain which, alas, will not heed it because it is convinced that the man who has delivered it ‘took us to war on a lie’.  So it is shutting its mind to the fact that the civilised world simply cannot afford to allow messianic apocalyptic religious fanatics with a history of promoting terror against western interests, raving with Nazi-style delusions about the Jews against whom they have threatened genocide, arm themselves with nuclear weapons. And although there are currently urgent warnings of an expected major terrorist attack upon the UK, the British are shrugging their shoulders because they have told themselves that after Iraq they just don’t believe any such statements. Small wonder that Britain is the Islamists’ number one target in the world.  Such suicidal stupidity and complacency make Britain uniquely vulnerable to attack.

There was, however, one other thing Blair said which jarred. When he was in office, he frequently observed that if only the Israel/Palestinian impasse could be resolved, this would take much of the steam out of Islamic extremism worldwide. This observation was not only asinine but helped swell the hysteria and bigotry against Israel amongst the western intelligentsia which has in turn stoked the fires of Islamic rage. Asinine because Blair got it the wrong way round: it’s only if Islamic extremism is defeated that the Middle East impasse will be resolved.

In his remarks this week, Blair repeated the canard:

He emphasised that the achievement of a peace settlement between Israel and the Palestinians would remove ‘much of the poison which the extremists use’.

But the one and only reason why there is no peace settlement is that the Arab and Muslim world, including Fatah and Hamas, are themselves poisonous extremists, in that they openly refuse to accept Israel as a Jewish state ever — not because of the settlements, not because of Israeli intransigence, but because they have a fundamental problem with the Jews.

They make no bones about this.

‘We promise our Muslim brothers that we will do the best we can to harm Jews in Israel and the world over, with Allah’s help and according to his command,’

The leader of Hezbollah, Sheikh Hassan Nasrallah, has said:

‘If we searched the entire world for a person more cowardly, despicable, weak and feeble in psyche, mind, ideology and religion, we would not find anyone like the Jew. Notice, I do not say the Israeli.’

After the lynching of two Israeli soldiers who had taken the wrong turning in Ramallah in 2000, Sheikh Ahmad Abu Halabaya said, drawing on the Qur’ran in a live broadcast on PA TV from a Gaza City mosque:

‘The Jews are the Jews. Whether Labor or Likud the Jews are Jews. They do not have any moderates or any advocates of peace. They are all liars. They all want to distort truth, but we are in possession of the truth…They are the terrorists. They are the ones who must be butchered and killed, as Allah the Almighty said: “Fight them: Allah will torture them at your hands, and will humiliate them and will help you to overcome them, and will relieve the minds of the believers.’

A tirade by the Egyptian cleric Muhammad Hussein Ya’qoub, transmitted on Al Rahma TV in January 2009, made explicit the fact that the real reason for the Muslim war against the Jews was nothing to do with Israel:

‘If the Jews left Palestine to us, would we start loving them? Of course not. We will never love them. Absolutely not. The Jews are infidels – not because I say so, and not because they are killing Muslims, but because Allah said: ‘The Jews say that Uzair is the son of Allah, and the Christians say that Christ is the son of Allah. These are the words from their mouths. They imitate the sayings of the disbelievers before. May Allah fight them. How deluded they are.’

‘It is Allah who said that they are infidels. Your belief regarding the Jews should be, first, that they are infidels, and second, that they are enemies. They are enemies not because they occupied Palestine. They would have been enemies even if they did not occupy a thing. Allah said: “You shall find the strongest men in enmity to the disbelievers to be the Jews and the polytheists.”Third, you must believe that the Jews will never stop fighting and killing us. They not for the sake of land and security, as they claim, but for the sake of their religion: “And they will not cease fighting you until they turn you back you’re your religion, if they can.

‘This is it. We must believe that our fighting with the Jews is eternal, and it will not end until the final battle – and this is the fourth point. You must believe that we will fight, defeat, and annihilate them, until not a single Jew remains on the face of the Earth. It is not me who says so. The Prophet said: ‘Judgment Day will not come until you fight the Jews and kill them. The Jews will hide behind stones and trees, and the stones and tree will call: Oh Muslim, oh servant of Allah, there is a Jew behind me, come and kill him – except for the Gharqad tree, which is the tree of the Jews.’ I have heard that they are planting many of these trees now. […]As for you Jews – the curse of Allah upon you. The curse of Allah upon you, whose ancestors were apes and pigs.

‘You Jews have sown hatred in our hearts, and we have bequeathed it to our children and grandchildren. You will not survive as long as a single one of us remains. Oh Jews, may the curse of Allah be upon you. Oh Jews… Oh Allah, bring Your wrath, punishment, and torment down upon them. Allah, we pray that you transform them again, and make the Muslims rejoice again in seeing them as apes and pigs. You pigs of the earth! You pigs of the earth! You kill the Muslims with that cold pig of yours.’

This is what the west is actually up against, although even Blair still can’t acknowledge it. The Islamists don’t hate the west because of Israel. They hate Israel and the west above all because of their pathological, psychotic hatred of the Jews. And the horrifying fact is that it is this pathological, psychotic hatred that is being stoked up by the west’s adoption of the false ‘narrative’ of Muslim oppression – while the ‘peace process’ that Blair has so assiduously promoted for so many years, and which is based on the tragically naive premise that this is an argument over land boundaries, gives the Islamists every incentive to continue their manipulative and murderous ‘strategy of stages’ towards Israel’s destruction and the defeat of the west.