Loyalty oath under consideration in Israel 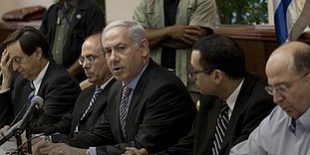 It is likely that getting the PA to give ground on recognizing Israel as a Jewish state is part of the formula being discussed between Israel and the US regarding finding ways to get an extension of some sort of the recently expired settlement moratorium.

The cabinet ministers on Sunday will be asked to approve an amendment to the Citizenship and Entry Law whereby the declaration naturalized citizens must make will read, “I declare that I will be a loyal citizen to the State of Israel as a Jewish and democratic state, and I obligate myself to respect its laws.”

Up until now the wording was merely a pledge of loyalty to the State of Israel.

This declaration will not apply to new immigrants coming into the country under the Law of Return, nor will it apply to people who already have citizenship.

In other words, this is not the loyalty oath Foreign Minister Avigdor Lieberman campaigned for during his elections, whereby Arab citizens would have to pledge allegiance to Israel as a Jewish state.

One source in the Prime Minister’s Office said that with Netanyahu demanding that the Palestinians recognize Israel as the nation-state of the Jewish people, it was only logical that Israel make the same demand of those seeking citizenship as well. There has to be one “coherent policy,” the official said.

If the amendment passes the cabinet on Sunday, which it is expected to do, it will then go Prime Minister Binyamin Netanyahu will not to the Knesset for approval.

“Israel is the national state of the Jewish people,” Netanyahu said in a statement. “This is a basic principle that guides the government in its policies, foreign and domestic.

It is a cornerstone of Israeli legislation.

This principle is articulated in the terminology, ‘Jewish and democratic state,’ and it is fitting that this principle will appear in the declaration of loyalty for anyone who wants to become a citizen.”

The cabinet held three discussions on this highly emotive issue in July, with a number of versions for the oath proposed in order to calm the concerns of Israeli Arabs.

A government source in July said the wording of the declaration was designed to make it more difficult for Palestinians married to Israeli Arabs to gain citizenship on the basis of family unification.

One of the groups that would be most impacted by the pledge would be Palestinians from beyond the Green Line married to Israeli Arabs asking for citizenship on the grounds of family reunification.

Currently there are an estimated 25,000 Israeli Arabs married to Palestinians from beyond the Green Line.

Netanyahu’s decision angered ministers on the Left and Arab MKs.

Minorities Affairs Minister Avishay Braverman (Labor) called it “infuriating and irresponsible.” He said it would encourage efforts to delegitimize Israel around the world.

MK Ahmed Tibi (United Arab List- Ta’al) said the legislation “sanctioned discrimination against Arabs” and added that “no declaration can cancel the Palestinian narrative that has been accepted all over the world.”

Israel Beiteinu praised the prime minister for the move, which a party spokesman said was fulfilling a promise Netanyahu had made to Israel Beiteinu when the coalition was formed.

“The obligation of every Israeli citizen to maintain Israel as a Jewish democratic state and even more so for people who are not citizens but want to be, is a fundamental and necessary need, especially when there are those who question ,” the party said.

National Union MK Arye Eldad said he was glad that Netanyahu realized that what he was asking of the Palestinians and the world he had to also ask potential citizens of his own country. But he expressed concern that the prime minister was only advancing patriotic legislation in order to ease future moves toward withdrawing from territory and establishing a Palestinian state.

It was not immediately clear what impact the announcement would have on efforts to keep the PA from bolting the direct talks over the settlement moratorium issue, or on whether the Arab League, at its meeting this weekend in Libya, would instruct the PA to stay or quit the talks.

Meanwhile, intense talks continued on Wednesday to find a formula that would enable a continuation of direct talks, with Netanyahu speaking by phone with Jordanian King Abdullah II, who met the day before in Amman with Welfare and Social Services Minister Isaac Herzog (Labor), who is closely involved in the discussions.

Jordan, as well as Egypt and Saudi Arabia, is reportedly coming under not insignificant pressure from the US to ensure that PA President Mahmoud Abbas does not quit the talks.

French Foreign Minister Bernard Kouchner and Spanish Foreign Minister Miguel Moratinos are expected to arrive in Israel next week for meetings with Netanyahu. Moratinos met on Wednesday in Spain with Public Diplomacy and Diaspora Affairs Minister Yuli Edelstein (Likud), who reaffirmed Israel’s commitments to talks with the PA without preconditions.

The settlement moratorium issue, meanwhile, was not discussed at the security cabinet meeting on Wednesday. Instead, that meeting focused on enhancing the home front’s readiness for various emergency scenarios. The meeting took place on the same day that two Kassam rockets exploded near the Gaza border, causing no casualties or damage.