'Al-Aqsa II' being built for Ahmadinejad 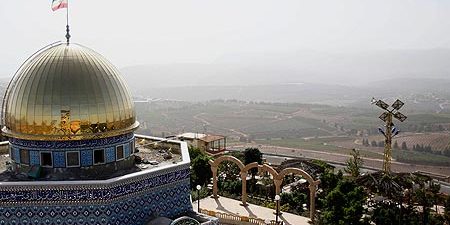 The Lebanese people will soon have an Al-Aqsa mosque of their own, Yedioth Ahronoth reported Tuesday.

The mosque, to be built a few hundred meters from the border with Israel, is being constructed in honor of Iranian President Mahmoud Ahmadinejad’s upcoming visit.

Construction is nearing its end in the village of Maroun al-Ras, with the structure being made to look exactly like its Jerusalem prototype – including the dome on top. But there is one glaring difference: An Iranian flag, a tribute to its sponsor.

Bulldozers and cranes have been working for months on the site, which will also include a boardwalk and a lookout point from which Ahmadinejad plans to throw a symbolic stone at Israel. The president will also inaugurate the mosque.

“It is unbelievable that Iranian money has made its way to the entrance of our home. It is very worrying,” says Shimon Biton, head of the council of Avivim, a town located just a few hundred meters from the new mosque. “From our bitter experience we are sure that during the next war this site will be used as a foremost Hezbollah outpost. I am certain that bunkers and military storerooms have been built underneath it.”

The residents of Avivim plan to head to the border during Ahmadinejad’s visit in order to stage a protest, Biton says.

If the visit is indeed carried out, it will be the Iranian president’s first since his inauguration, in 2005. While there, he is scheduled to meet with Hezbollah Secretary-General Hassan Nasrallah, as well as a number of Lebanese leaders.