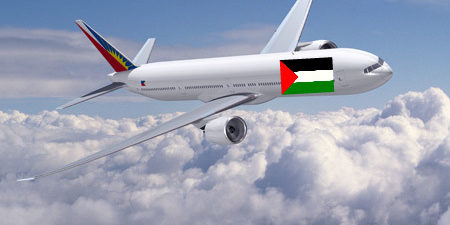 The Obama administration supports the concept of the Palestinian Authority opening an airport near Jerusalem, according to PA sources speaking to WND.

The PA is planning to start the infrastructure of the airport in the town of al Buqya, between Jerusalem and the Jordan Valley. WND has learned that PA official Saadi el-Krunz is heading the PA campaign to raise money for the airport.

In line with the demand that Israel freeze all Jewish construction in the West Bank and eastern section of Jerusalem, WND has learned that the U.S. is aiding the Palestinians in building infrastructure in largely Arab eastern Jerusalem neighborhoods controlled by Israel.

In so doing, the U.S. is working with the PA to change the facts on the ground, which could affect the outcome of a future Israel Palestinian agreement.

A WND investigation previously determined the U.S. has been aiding the Palestinians in developing infrastructure in eastern Jerusalem, including on property owned by Jews.

Palestinian Authority officials have threatened to halt the direct negotiations that began in early September if Israel does not reinstate the 10-month-old freeze on Jewish construction in the West Bank that expired Sunday.

Palestinian officials, have told WND they received a U.S. pledge that Israel will free a number of Palestinian prisoners as well as transfer to the PA security control of several West Bank areas in the coming months as part of a series of Israeli gestures to the PA.

PA officials, meanwhile, said the U.S. has been negotiating the borders of a future Palestinian state that would see Israel eventually withdraw from most of the West Bank and some areas of eastern Jerusalem with the exception of the three blocs.

While the PA does not believe it will see an actual Palestinian state within a year, it expects in that time it will take over many more neighborhoods in the West Bank and eastern Jerusalem that are normally controlled on the ground by Israel.

The PA said the expectation is based on pledges by the Obama administration. They said The U.S. received a pledge from Netanyahu to transfer more security control of West Bank towns as well as release a number of Palestinian prisoners as gestures to entice Abbas to stay in the talks.

Netanyahu, meanwhile, secretly has proposed a new plan whereby Jews living in the West Bank will remain in their communities after the territory becomes part of a Palestinian state.

Officials in both Israel and the PA have confirmed the plan to WND, marking the first time an Israeli leader has ever put on the table in a serious way a proposal involving Jewish West Bank residents remaining in a Palestinian state.

Conventional negotiations always have assumed an Israeli evacuation of its communities inside any territory taken over by the PA.