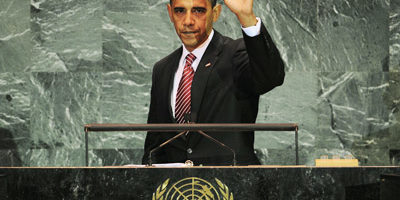 In his address to the UN General Assembly Thursday, US President Barack Obama called for a continuation of the settlement freeze and expressed the hope that by next year, current Israeli-Palestinian negotiations will have resulted in “an independent, sovereign state of Palestine.

“We believe that the moratorium should be extended.  We also believe that talks should press on until completed,” Obama said, adding later that “now is the time for this opportunity to be seized, so that it does not slip away.”

Deeming the Israeli-Palestinian conflict “as old as this institution,” Obama told the General Assembly that both Israel and the Palestinians must espouse “genuine reconciliation” rather than resorting to familiar tropes of intransigence.

“If we do, when we come back here next year, we can have an agreement that will lead to a new member of the United Nations – an independent, sovereign state of Palestine, living in peace with Israel,” Obama said to applause from the General Assembly.

“Those who long to see an independent Palestine must also stop trying to tear down Israel,” Obama said. “After thousands of years, Jews and Arabs are not strangers in a strange land. After 60 years in the community of nations, Israel’s existence must not be a subject for debate.

“Israel is a sovereign state, and the historic homeland of the Jewish people,” the American president continued. “It should be clear to all that efforts to chip away at Israel’s legitimacy will only be met by the unshakeable opposition of the United States.

“And efforts to threaten or kill Israelis will do nothing to help the Palestinian people,” he added. “The slaughter of innocent Israelis is not resistance – it’s injustice.”

Obama made a special point of praising Mahmoud Abbas’s leadership.

“And make no mistake: The courage of a man like President Abbas, who stands up for his people in front of the world under very difficult circumstances, is far greater than those who fire rockets at innocent women and children,” he said.

Characterizing the current era as “no ordinary time for our people,” Obama said he has “had no greater focus as president than rescuing our economy from potential catastrophe.”

He also alluded to America’s “refocused” fight against al- Qaida, and gradual withdrawal from the conflict in Iraq.

The president made clear that Iran will suffer consequences should it continue to violate the Nuclear Proliferation Treaty.

“The United States and the international community seek a resolution to our differences with Iran, and the door remains open to diplomacy should Iran choose to walk through it,” Obama said. “But the Iranian government must demonstrate a clear and credible commitment and confirm to the world the peaceful intent of its nuclear program.”

The Israeli delegation was not in the hall to hear Obama’s speech, as it was the first day of Succot and it is Israeli government policy not to work or travel on Jewish holidays. Contrary to his initial plans, President Shimon Peres intended to stay in New York at least until Friday, sources told The Jerusalem Post Tuesday.

The absence of the Israeli delegation, however, was apparently not immediately understood by the secular public. The New York Times reported that “in an odd turn, the Israeli delegation did not appear to be in the hall of the General Assembly to hear words. Thursday is a Jewish religious holiday – Succot – and it was possible that the Israeli envoys were honoring it.”