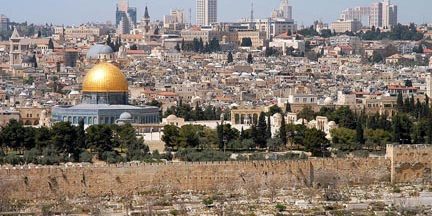 Former Israeli Ambassador to the UN, Dore Gold said:  “The problem is that when one of Israel’s leaders suggests that the Old City be put under an international regime, international diplomats begin to think the government may entertain such proposals. Ben-Gurion was able to stand up to the UN General Assembly in 1949 because the world understood that Jerusalem represented a red line from which neither he nor any other representative of Israel was prepared to retreat. … Today, Israel must reestablish that red line clearly, for the impression left by these proposals badly weakens its ability to defend itself. They imply that it has lost its will and might be prepared to concede what has been – and will remain – one of the identifying core values defining the identity of the Jewish people.”

God says: “Now I have chosen Jerusalem for my Name to be there, and I have chosen David to rule my people Israel.”… “I will defend this city and save it, for my sake and for the sake of David my servant.”…   “If I forget you, O Jerusalem, may my right hand forget its skill. May my tongue cling to the roof of my mouth if I do not remember you, if I do not consider Jerusalem my highest joy.”
.

The Jerusalem Connection says:  The Obama administration wants to make Israel an offer they can’t refuse. They desperately want a Palestinian state with a divided, or at least an internationalized Old City. And thus Obama can be heralded as the great peace maker between Israel and the Palestinians. But what could possibly induce Israel’s leaders to make such concessions? It’s certainly not guarantees that the US, the UN, the EU and the Quartet etc. will insure a pacified Palestinian state. That’s simply not going to happen and those of a sound mind in Israel know it. Israel will always have to insure its own security against the viscerally embedded anti-Semitism in the Arab world. A possible scenario of Israel relinquishing control of the Old City would be a guarantee it could build the Third Temple or somehow re-institute its ancient sacrificial system at a location other than the Temple Mount. If and when that happens we have entered into a time of enormous Biblical significance. The “Day of the LORD” is at hand. Fasten your spiritual seat belts!