Jews pelted with rocks at the Feast of Tabernacles 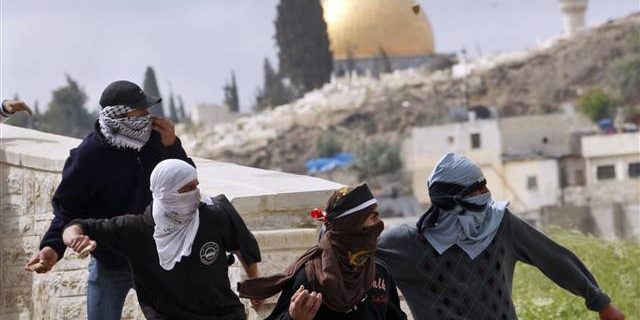 Riots near the Temple Mount that left at least 10 Israelis wounded were instigated and partially directed by the Palestinian Authority, according to a senior Israeli security official speaking to WND.

The security official said elements of the Israeli government yesterday asked the PA to cease its involvement in instigating the clashes, which included Palestinians throwing rocks from the Mount aimed at Israeli worshipers at the Western Wall below.

“The clashes are guided mostly by Fatah (PA) militants as a tool to pressure Israel on Jerusalem,” the security official said.

The riots come just days after the U.S. administration publicly called on Israel to halt Jewish construction in the West Bank and eastern sections of Jerusalem in line with U.S.-brokered talks aimed at creating a Palestinian state in those territories.

The riots were first sparked when Palestinians reportedly surrounded the car of an off-duty Israeli guard who was purchasing gas for his vehicle in an Arab neighborhood. The Palestinians blocked and then stoned the car, according to the guard, who told investigators he opened fire on the Palestinians fearing he was going to be killed or abducted. One Palestinian was shot dead.

Hours after the incident, Palestinians rioted throughout eastern Jerusalem, with particular focus on the Temple Mount area and Silwan, a nearby community.

An Israeli man, 35, was stabbed by a rioter near Mount Scopus and hospitalized with moderate wounds, while three other Israelis were slightly wounded in the same area when Palestinian rioters reportedly overturned their car.

Israelis at the Western Wall were pelted with stones until Israeli riot police stormed the Temple Mount to stop the violence.

Police reportedly deployed en mass to stem any further Palestinian violence along with the start of the Jewish holiday of Sukkot, or the Feast of the Tabernacles.