US: Time may come for special nuke probe of Syria 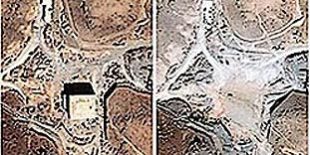 A US envoy on Thursday suggested time was running out for Syria to cooperate with a UN atomic agency probe of alleged secret nuclear activities before the agency invokes its seldom-used authority to call for a special inspection — a possible prelude to UN Security Council involvement.

Rising to Syria’s defense, a senior Iranian diplomat accused the organization — the International Atomic Energy Agency — of harassing Syria by leveling false allegations in collusion with Israel and its allies.

The two officials spoke as the 35-nation atomic agency board meeting turned its attention from the agency’s probe of Iran’s nuclear activities to suspicions that Syria has a hidden nuclear program.

Three years ago, IAF warplanes reportedly bombed what the US says was a nearly finished nuclear reactor, launching an agency investigation. After an initial visit to the site, agency inspectors have not been allowed to return — or visit other suspect sites — and the agency’s chief, Yukiya Amano, says Syria’s lack of cooperation could mean that information sought by the agency could be lost with the passage of time.

Iranian envoy Ali Asghar Soltanieh told the board that Israel’s attack is the real issue and Syria has become targeted by a “vicious circle of endless questions and allegations.”

But Glyn Davies, the chief US delegate to the agency, told the meeting that, unless Syria ends its stonewalling, the IAEA must increasingly “consider all available measures and authorities to pursue the verification assurances the international community seeks” — diplomatic language for a special inspection.

Only twice has the atomic agency ever called for or carried out a special inspection, which gives it authority for countrywide inspections of known or suspect nuclear activities.

Romania asked to be inspected in 1992 to show that the post-communist government had no nuclear-weapons aspirations. A year later, the agency asked for a special inspection in North Korea — a request turned down by the country, which continued with its secret development of nuclear weapons.

Refusal by Syria to allow a special inspection would allow the board to refer the issue to the UN Security Council, which then could issue a reprimand, pass a resolution demanding compliance and ultimately pass the kind of sanctions Iran is now under for refusing to heed demands to curb nuclear activities that could be used both to generate energy or make weapons.