Israel and Palestinians clash over agenda for Sharm peace talks 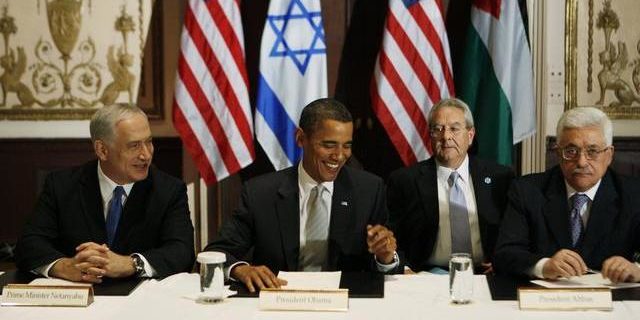 Israel and the Palestinians are at odds over which subjects will open their next round of peace talks, set to start Tuesday in Sharm el-Sheikh in Egypt. Prime Minister Benjamin Netanyahu wants to begin with security arrangements, recognition of Israel as a Jewish state and a Palestinian willingness to declare an end to the conflict when an agreement is signed.

But Palestinian President Mahmoud Abbas and other Palestinian leaders want to begin by defining the borders of the Palestinian state. They adamantly refuse to recognize Israel as the nation-state of the Jewish people.

Netanyahu’s office declined yesterday to comment on U.S. President Barack Obama’s call to the Israeli government to extend the construction freeze in settlements, due to expire on September 26. Instead, sources close to Netanyahu focused on Obama’s comments that the United States would not force an agreement on the parties.

“A major bone of contention during the course of this month is going to be the potential lapse of the settlement moratorium,” Obama said Friday at a White House press conference. “The irony is, is that when Prime Minister Netanyahu put the moratorium in place, the Palestinians were very skeptical.”

According to Obama, “it turns out, to Prime Minister Netanyahu’s credit and to the Israeli government’s credit, the settlement moratorium has actually been significant. It has significantly reduced settlement construction in the region. And that’s why now the Palestinians say, you know what, even though we weren’t that keen on it at first or we thought it was just window dressing, it turns out that this is important to us.”

Obama said he realized that some members of Netanyahu’s government wanted the freeze to end. So he had told Palestinian President Mahmoud Abbas, “you’ve got to show the Israeli public that you are serious and constructive in these talks so that the politics for Prime Minister Netanyahu – if he were to extend the settlements moratorium – would be a little bit easier.”

In response to a question from Haaretz about what he would do if the negotiations failed – because since the opening of the talks in Washington the leaders sounded less prepared for a historic compromise – Obama said: “Ultimately the parties have to make these decisions for themselves.”

But he said that if the talks broke down the United States would keep trying; the talks represented an opportunity “also to change the strategic landscape in the Middle East,” which would “help us deal with an Iran that has not been willing to give up its nuclear program. It would help us deal with terrorist organizations in the region. So this is something in our interest.”

Obama noted that both Secretary of State Hillary Clinton and special Mideast envoy George Mitchell would be at the talks with the Palestinians in Sharm el-Sheikh as a sign of the deep involvement of the United States in the process.

Netanyahu will arrive in Sharm el-Sheikh on Tuesday morning for a meeting with Egyptian President Hosni Mubarak. Netanyahu will then meet with Abbas, Clinton and Mitchell.

On Wednesday, Clinton and Mitchell will meet with Netanyahu and Abbas in Jerusalem.

A source in the Foreign Ministry said Foreign Minister Avigdor Lieberman had canceled a planned trip to Washington after Clinton asked to meet with him on Wednesday.

Netanyahu and President Shimon Peres exchanged holiday greetings with Abbas during Rosh Hashanah and Eid el Fitr. Peres told Abbas he should remain in office until peace is achieved, and that Netanyahu was a partner he could depend on. Abbas told Peres the Palestinians were serious about reaching a deal as soon as possible.

Obama said “there are going to be a whole bunch of folks in the region who want to undermine these negotiations. We saw it when Hamas carried out these horrific attacks against civilians.”

Obama said he believed that Abbas “understood the window for creating a Palestinian state is closing.”

He said Israel and the Palestinian Authority needed each other because some elements in the region that purport to be friends of the Palestinians are doing “everything they can to avoid the path that would actually lead to a Palestinian state.”

Meanwhile, the Fatah Central Committee released a statement over the weekend calling for the PA leadership not to continue direct talks with Israel if the settlement freeze is not extended. The statement appears to be an attempt to show the international community that even people in Fatah are pushing Abbas to condition the peace process on a continued settlement moratorium.

The Egyptian daily Al-Ahram reported yesterday that according to Palestinian sources, a crisis had erupted between Shaath and chief negotiator Saeb Erekat. The paper said Shaath is sparring with Erekat in a bid to lead the negotiations with Israel.

The strained relations between the two reached a peak a day after the Washington summit when Shaath told the Palestinian newspaper Al-Ayyam that the Israeli and Palestinian negotiating teams would be meeting in Jericho last Monday, although Israel and the PA had agreed to keep the meeting a secret.

Erekat said Shaath was wrong, although Erekat and Netanyahu’s negotiator Isaac Molho apparently did meet to prepare for this week’s talks.