A Muslim Against the Ground Zero Mosque 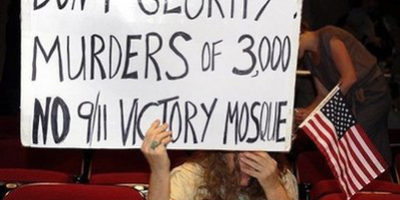 It is indisputable that as Muslim immigrants we, as a whole, have failed to put ourselves in the shoes of the host people. For the last few decades almost all that Americans have seen from those of us who take our religion literally is violence, conspiracy, intimidation, gender-discrimination and terrorism. Meanwhile, those of us who consider ourselves moderates have mostly stood silently by, watching open or stealth intolerance in the name of Islam from the sidelines.

The following is an example of graceful behavior when it comes to religious tolerance: On March 3, 2002, the Hindustan Times in India conducted a poll on building a temple on the ruins of the Babri mosque destroyed by radical Hindus. The destruction involved mass-murder, mass-rape and the burning of properties of thousands, mainly Muslims, in communal riots. The result of the poll showed an astounding 69.13% of Hindus supporting the rebuilding of the original mosque and in opposition to building a Hindu temple. That was enlightenment on their part.

Ground Zero is a place of the mass-murder of innocents. Opposition to building a mosque there is not “anti-Islamic conspiracy” but the opinion of nearly 70% Americans and 61% of local citizens (CNN, Aug 17, 2010). Indeed we have a legal right to build it, but lest we forget: applying a right attached to religious faith mandates serious wisdom. The plethora of “Legal Right” gave unethical legitimacy not only to the mosque-builders but also to the “Koran Burning” project on 9/11 of Rev. Terry Jones’ of Florida Dove Outreach Center. “It is our right” he claimed on CNN.  Yes, Jones finally abandoned his idea of carrying out the plan yesterday (Thursday, September 9), but one still wonders: Is Jones not aware that progressive Muslims also share his agony about Sharia law? Is he not aware that, after functioning for fourteen years with the support of provincial law, the Canadian Sharia Court was legally uprooted not by violence but mainly by the forceful movement of progressive Muslims (i.e. the Muslim Canadian Congress, The Canadian Council of Muslim Women and the International movement against Canadian Sharia Court)?

Americans are not fools; they saw that the desperate Governor of New York David Paterson proposed a public land somewhere else for the mosque but the proposal was declined. Americans are also watching the Tsunami of protests from the majority of their countrymen, which include Muslim and non-Muslim victims of 9-11, Muslim Americans, Muslim organizations in America and beyond — including the Muslim Canadian Congress and the Bangladesh Jamate Islami falling on deaf ears and hardened hearts.

Such deliberate and destructive interfaith actions reduce our interfaith dialogues to fraudulent lip-service in the eyes of non-Muslims. No matter how sweet the proponents of the mosque talk, constructing a building at the cost of peace shows a dire lack of wisdom, sensitivity and far-sightedness on the part of our Islamic leadership. New York already has 30 mosques and nothing special or new can be achieved in that proposed building. Furthermore, Dr. Ali Aliyami of the Center for Democracy and Human Rights in Saudi Arabia, Washington, said it correctly: “Building of the mosque next to Ground Zero will send the wrong messages to terrorist groups and autocratic and theocratic Muslim dictators.”

Our Muslim identity, dignity, safety and rights are not toys for our religious leaders to play with. In recent years, the image of Islam and of Muslims has suffered badly for their wrong actions. The issue of the Ground Zero mosque gave them a perfect opportunity to restore our image and to show Islamic tolerance to peoples’ opinion; they still have time to grab this opportunity. If this pawn on the chessboard of politics, ego and money-game is built, it will be ceaselessly cursed by the majority of Americans — including a portion of American Muslims.

All mosques are not Islamic either. That is why God warned our Prophet about such a mosque (The Quran 9-107) and the Prophet destroyed the “Mosque Al Zarrar.” Our leaders must learn also from the Hudaybia treaty in 628; our Prophet and his thousand followers had every right and strength to perform the Hajj but for the cause of peace, the Prophet sacrificed it along with the two most important tenets of Islam on that written document. That saved two warring people from bloody battle and Muslims gained much the following year.

The mosque at Ground Zero, if constructed, will become a permanent liability for Americans — and for American Muslims even more.