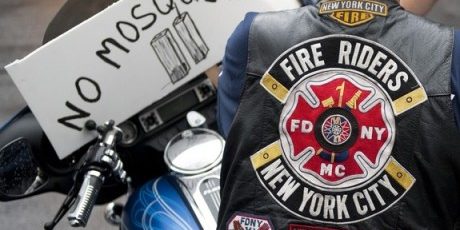 The anti-mosque rally at Ground Zero held in New York City on Sunday, August 22 brought over 12,000 Americans to lower Manhattan. They gathered to express their opposition to the building of a mosque next to the site where the World Trade Center towers once stood.  To the thousands of men and women assembled, including family members and friends of the 3000 victims of the 9/11 attacks, it was a grassroots expression of outrage at the audacity of Islamists and Imam Feisal Abdul Rauf to refuse to consider another location for the mosque. Americans who are familiar with Islamic history understand the significance of the initial choice to name the Islamic community center/mosque the Cordoba House. They correctly understand that this as an expression of Islamic triumphalism.

Cordoba was the seat of the caliphate established in what is now modern Spain after the Islamic invasion from North Africa in the 8th century C.E.  The medieval occupation of Spain – “al-Andalus” – is considered by Islamic theorists to have been an inevitable step in the manifest destiny of Islam. The mosque was built to celebrate the victory of Muslims over the Spanish “infidels.”  The eventual Muslim military reversals during the lengthy Spanish Catholic “Reconquista” are still considered a tragic but temporary triumph of the infidels.  The great mosque in Cordoba was built on the foundation of a Christian cathedral, and when the Spanish retook Cordoba in the 13th century, they turned the magnificent mosque back into a cathedral.  No longer a church, today the structure is called La-Mezquita or “The Mosque.”

Americans, unlike many Europeans, reject the notion of “better green than dead” (green being the symbolic color of Islam), just as they refused to accept the mantra “better red than dead” during the Cold War. Now, they have rejected New York Mayor Michael Bloomberg’s appeasement of the Islamists.  In defending the building of the mosque, Bloomberg declared:

Of course, it is fair to ask the organizers of the mosque to show some special sensitivity to the situation, and in fact their plan envisions reaching beyond their walls and building an interfaith community. By doing so, it is my hope that the mosque will help to bring our city even closer together, and help repudiate the false and repugnant idea that the attacks of 9/11 were in any way consistent with Islam…Muslims are as much a part of our city and our country as the people of any faith. And they are as welcome to worship in Lower Manhattan as any other group. In fact, they have been worshipping at the site the better part of a year, as is their right. The local community board in Lower Manhattan voted overwhelmingly to support the proposal. And if it moves forward, I expect the community center and mosque will add to the life and vitality of the neighborhood and the entire city.

Mayor Bloomberg of New York and President Obama have either opted to ignore the Islamic practice of taqiyya and kitman (dissimulation and deception) – practices meant to conceal malevolent intentions of Muslims when they are a minority in an infidel land — or are simply blissfully ignorant of them.  If so, they need a new corps of advisors. Christians and Jews are guided by ethical standards that consider lying to be a sin while Islamic jurisprudence and theology endorse the use of taqiyya against unbelievers (infidels) and regard this form of lying as a virtue.  In the case of the building of the Islamic center near Ground Zero, Imam Feisal Abdul Rauf is more than likely practicing taqiyya.  Beyond taqiyya, however, there is also the matter of a double-standard employed by President Obama and Mayor Bloomberg, who are urging Americans to be tolerant of Muslims and Islam while ignoring the lack of religious freedom in the Arab Middle East for Christians and Jews, and not insisting that Saudi Arabia allow Christian worship and the building of a church in Riyadh, if not in Mecca.