Victims on the road to 'peace' 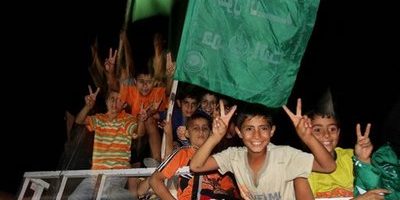 TALIA AND YITZHAK AMES met as students at Moscow University, as they waited in line one day to register for their classes. They got married in 1985, and had two children by the time they emigrated to Israel in 1991. Four more children followed in the next 19 years, and Talia was nine months pregnant with their seventh when she and Yitzhak were murdered by Palestinian terrorists last week.

The killers ambushed them as they were driving home Tuesday night, heading south on Highway 60 toward Beit Haggai in the Hebron Hills. With Talia and Yitzhak in the car when the killers opened fire were two other residents of Beit Haggai: Avishai Schindler, a newly-married yeshiva student, and Kochava Even-Haim, a nursery school teacher and the mother of an 8-year-old daughter. Kochava’s husband Maimon, an emergency-aid volunteer, was one of the first responders to arrive at the scene, unaware that he would find his wife among the dead. All of the victims were shot repeatedly at close range, and the car was riddled with dozens of bullets.

Hamas, a terrorist organization whose charter extols the murder of Jews, promptly claimed responsibility for the massacre, describing it as “part of the repelling operations against the occupation assaults on Gaza Strip and West Bank.” In Hamas-controlled Gaza, the bloodshed was celebrated; the news was broadcast from loudspeakers and there was a “victory” rally in the Jebaliya refugee camp. The Palestinian Authority, headed by Fatah’s Mahmoud Abbas, issued a tepid statement condemning the Hamas “operation” — not because the slaughter of innocent civilians is a brutal atrocity, but merely on the tactical grounds that it “contradicts Palestinian interests” by making it more difficult for “the Palestinian leadership to garner international support.”

The killings on Highway 60 took place as Israel’s Prime Minister Benjamin Netanyahu was en route to Washington for a new round of negotiations with the Palestinian Authority. When word of the bloodbath reached him, he could have cancelled the talks and immediately returned home to attend the victims’ funerals and focus on restoring security. But he declined to alter his itinerary. “We are committed to peace,” his spokesman said. His position didn’t change even after a second attack along the same highway Wednesday night, when terrorists opened fire on an Israeli car, wounding a young rabbi and his wife.

A persistent myth of the Arab-Israeli conflict is that Palestinian terrorists kill Jews in order to “disrupt the peace process,” and that the best response to terrorism is to persevere with negotiations. That explanation for last week’s carnage was repeated everywhere, from the White House (“This brutal attack underscores how far the enemies of peace will go to try to block progress”) to Israel’s opposition leader Tzipi Livni (“ “cold, political motive: to prevent the peace process” to the international media.

But far from opposing a “peace process” meant to push Israel into ever-deeper concessions, retreats, and self-endangerment, terrorists — whether affiliated with Hamas or with Fatah — seek to accelerate it. The two Palestinian factions may be at war with each other, but they have always been as one in rejecting Israel’s existence as the sovereign state of the Jewish people. So long as they refuse to budge from that position, Israeli-Palestinian peace is impossible.

Yet rather than say so forthrightly, Israeli leaders keep insisting that diplomacy can end the conflict, and that they are prepared to sacrifice greatly for peace. It was once Israel’s policy never to bargain with terrorists, and to pursue peace through deterrence and patience and strength. But with the advent of the Oslo Accord, deterrence gave way to appeasement, negotiations, and a yearning for peace at any price. To both Fatah and Hamas, that desperation has made the Jewish state seem weak — and vulnerable to further pressure. In an opinion survey released last week, 55 percent of Palestinians endorsed anti-Israel violence as “essential” or “desirable,” while less than 14 percent called it “unacceptable.” “Israel’s very pursuit of peace,” journalist Evelyn Gordon wrote in Commentary earlier this year, “has spurred its enemies to go for the jugular.”

Netanyahu should have walked away from the table after last week’s butchery. Instead, he publicly anointed Abbas “my partner for peace” and reasserted his commitment to negotiations. When those negotiations fail, as they inevitably will, the impasse will be blamed on the insufficiency of Israel’s concessions. That will further enrage its enemies, some of whom will turn to terror.

And so the peace process proceeds. The victims on Highway 60 were only the latest of Israel’s “sacrifices for peace.” They are not likely to be the last.