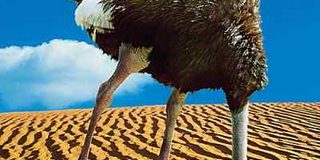 This month is “Black September” according to one Israeli diplomat quoted by the Washington Times. Legal challenges in European courts, UN resolutions, International Atomic Energy Agency pressures – the calendar is filled with “political landmines.” At the center of this minefield lies the resumption of the ‘peace talks’.

For those looking for some context to understand how Israel came to be in this dire situation, it’s helpful to look back at where it all started – the 1993 Oslo Accords, or what might be better termed ‘The Ostrich Accords’.

For the creators of Oslo were people who refused to face reality, and when reality did intrude, chose to bury their heads in the sand. A popular TV show, “Mythbusters,” has as its tagline “I reject your reality and substitute my own.” This should have been the official tagline of the Oslo Accords.

To illustrate just how out-of-touch those responsible for Oslo were, Dr. Aaron Lerner, director of the information service IMRA (Independent Media Review & Analysis), recently distributed English excerpts of an eye-opening March 7, 1997 Haaretz Magazine interview with Yossi Beilin, Deputy Minister of Foreign Affairs in the Rabin Government and chief architect, together with Foreign Minister Shimon Peres, of the Oslo Accords.

The interview starts off with the startling admission that they never gave a thought to where it might lead.

The interviewer asks Beilin: “When you entered the Oslo process, Rabin, Peres and you, was it clear to you that this was going toward a Palestinian state?” Beilin replies: “No. It is very interesting to note that the talks of the soul regarding ‘where will this process lead’ took place only between the sides, not within them. Within the Labor party and within the government and within the negotiating team I don’t recall any real and serious discussion of the final solution.”

Not only is the admission itself incredible – that those directing Israel’s affairs of state were so obtuse as to not even debate among themselves the dangers of embarking on an agreement with Yasser Arafat, the “Father of Modern Terror” – but so is the seeming lack of concern by Beilin, four years later, after so much Jewish blood had been shed, that there had been anything wrong in their approach.

They didn’t look at the dangers because they didn’t want to. To the question whether or not he thought the Arab-Israel conflict was “unsolvable,” Beilin replies, “Yes. It occurs to me. But I immediately utterly reject it. … I simply am not prepared to live in a world in which things cannot be resolved.”

Nothing has changed with Beilin. He still rejects reality, as evidenced by a recent op-ed by Moshe Dann, “Is Israel’s Left in Denial?” in which he reported on a debate between Beilin and National Union MK Aryeh Eldad. Beilin refused to entertain or respond to the possibility raised by Eldad that the Arabs could not, under any circumstances, recognize a state run by infidels on land they consider Wakf (under Muslim authority).

Prime Minister Yitzhak Rabin, who acquiesced to Oslo when Beilin and Peres presented him with a fait accompli, apparently shared the same unwillingness to contemplate unpleasant truths.

Beilin reveals that he asked Leah Rabin after her husband’s death if she knew what Rabin’s thoughts were on the final arrangements. She answered: “He was very pragmatic, hated to deal with what will be in many more years. He thought about what will be now, very soon. To the best of my knowledge he did not have a very clear picture of what the final arrangement would be.”

Shimon Peres, the man most responsible for the Oslo Accords and the evil that followed in its wake, was also the one most displaced from reality. In a briefing to foreign journalists on June 28, 1993, a few months before the “Declaration of Principles” defining Oslo was signed on the White House Lawn, he said, “Under the present climate, I do not see a possible agreement on a map. So we have suggested, instead of having a permanent map, we have a transitional voyage from the present planet to a new planet.”

To the Jewish Week, (June 2, 1994), he said: “I know it’s hard to forget the past, but I invite all of you to raise your eyes and see what a different world we are living in … Only believers can be risk takers. Miracles are part of our reality.” In his 1995 book “Battling for Peace,” he writes, “Reality for us – for me at any rate – was not what objectively existed or happened; it was what was going to happen, what could still be shaped and fashioned by people.” (For still more quotes see “Shimon Says”.)

Such remarks are no doubt what prompted Benjamin Netanyahu, speaking in Washington on September 24, 2001 to call Peres “the first Israeli astronaut. Peres is in outer space, totally unconnected to what is going on here. He did not learn a thing from the great bloodshed caused by Oslo that he brought us.”

One who never flinched from reality, much less attempted to create a new one, was Shmuel Katz. Two days after the Oslo Accords were signed, he wrote in “The PLO is Being Truthful” (September 15, 1993):

Israel is entering into an agreement with a terrorist organization which has proved to be the worst enemy of the Jewish people since the Nazis. Leader Arafat has specialized in ordering the murder of helpless people, including non-Jews whose murder served his purpose, like the killing of the American diplomats, tied to their chairs, in Khartoum.

Ma’alot of the machine-gunned schoolchildren, Munich of the Olympic sportsmen – a host of names and places come to mind. Murder after murder, all presided over by Arafat. In deference to public opinion, the US government refused to maintain contact with the PLO.

In Israel’s astonishing policy of surrender, the US now sees the prospect, long-desired in Washington, of its being squeezed back into the indefensible Armistice lines of 1949.

The US consequently embraced Arafat with zest. The charade on the lawn of the White House was an elaborate piece of obfuscation, designed to bluff Israel and its friends into the illusion that what was being signed between Israel and the PLO was a “sacred international agreement.” It is nothing of the sort.

It is an agreement between sovereign Israel and a private organization which has never tested its numerical strength in an election, whose leader was never elected by anybody. Nor indeed did Rabin even obtain a mandate to negotiate with the PLO. On the contrary, his mandate includes an injunction to the contrary.

Only a few weeks ago, he was uttering assurances that he would never negotiate with the PLO. This agreement was born in sin and reeks of it. It endangers Israel’s very existence.

Shmuel was not the lone voice arguing against the folly of the Oslo Accords. There were others. Benjamin Netanyahu was one. He, too, warned of the dangers, only to ignore his own warnings in his first term. His second term is set to be a replay of his first, as he breaks campaign promises, freezes settlements, comes out in favor of a two-state solution, and acts very much the way Rabin acted in the lead-up to Oslo.

It’s doubtful Netanyahu knows where the process he embarks on will end. The party across the table, however, certainly does. Translated excerpts from an “Appointment with Freedom” plan originally released in Arabic by the Palestine News Service calls for “mobilizing international support for the establishment of an independent State of Palestine on the border of the fourth of June 1967 with its capital in East Jerusalem.”

It describes a political and diplomatic barrage to end the “occupation” and bring about a Palestinian Arab state. This plan is already being implemented. Actively doing his part to see the plan come to fruition is none other than Yossi Beilin, whose Geneva Institute is behind a new ad campaign designed to reassure Israelis that the Arabs, despite all evidence to the contrary, really want peace. Only someone suffering from a severe case of “reality displacement” like Beilin could swallow that one. The pro-Arab ad campaign received a grant of $250,000 from the U.S. Agency for International Development.

Netanyahu is faced with a choice. Either break from the situation created by Oslo, or attempt to manage the situation. It appears he has chosen the latter. Why he has chosen this unworkable route is anyone’s guess – perhaps it goes to his background in business administration.

Netanyahu’s management style occasionally leads to forays into the surreal, like when, in the face of growing international pressure to curb “natural growth” in Judea and Samaria, he suggested in all seriousness to Italian PM Silvio Berlusconi that Israel could build not outwards, but upwards, making him sound like Shimon Peres, who talked about “vertical growth”. Perhaps Netanyahu is joining Peres in outer space, or should we say “upper space”?

The trouble with managing an unworkable process is clear from an August 31 Wall Street Journal article, which described Netanyahu as trying to reassure conservative members of his coalition that he won’t renew the building freeze even as he enters direct talks, which will likely require him to extend the freeze.

“You can’t both build and not build,” said a Hebrew University political science professor in the report, “And that’s what Netanyahu appears to be trying to do. He is trying to find some sort of compromise where technically they allow building but don’t actually build anything.”

Netanyahu, it would seem, is trying to manage the unmanageable. If he continues down that path it will lead to the unthinkable.