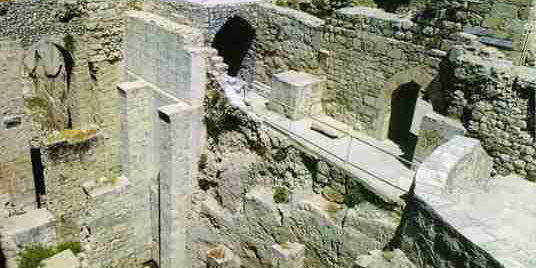 Healing of the Lame Man

John 5:6, “When Jesus saw him lying there, and knew that he already had been in that condition a long time, He said to him, ‘Do you want to be made well?’”

The Lamb of God stepped through the Sheep Gate just north of the temple precincts.  The merchants looked to make eye contact with Jesus, hoping for a sale, but to their disappointment his steps moved purposely by their smelly wares toward the Pool of Bethesda—the “Pool of Mercy.”  The pens of bleating merchandise rejoiced that at least one righteous man lived among them, but soon they too would find disappointment as a sinner would step up to make a purchase, carry his lamb to the priest and make sacrifice for his transgressions.

As Jesus neared the pool, the protests of the penned faded, but the moans of men and the despair of disease crescendoed in the Jerusalem air.  Surrounding the spring-fed pool lay the sick, the blind, the lame and the withered, longing for a miracle in the waters of mercy that could reportedly bring healing to those placed in the pool when the waters stirred.  For thirty-eight years the children of Israel wandered in the despair of desert sands (Deut. 2:14) and for thirty-eight years a nameless man with a nameless infirmity wandered through the corridors of hopelessness—not able to make it to the Promised Land of health, needing only one friend to lower him into the pool of mercy, but finding none.

Hearing healthy footsteps and making shy eye contact with the stranger, disheveled palms reached out to Jesus, hoping for alms.  “Do you want to be made well?” Jesus inquired of the man.  That’s not what I would have asked, for surely anyone would want a normal, healthy life, and reading on we learn that Jesus did miraculously heal the friendless man.  But Jesus knew that his question was not just for one nameless man, but for all men and women of every age, many of whom may not even know the extent of their soul sickness and many who may know but who nevertheless look elsewhere for a hopeful touch of healing, yet finding none.

Today in the Muslim quarter of the Old City of Jerusalem, pilgrims will find a beautiful Crusader church, named St. Anne’s after the grandmother of Jesus.  After singing an a cappella hymn in the magnificently acoustical sanctuary, one should walk a handful of steps beyond the church to a railing that overlooks a successful archaeological dig far below the surface of the courtyard, revealing the rubble of the Pool of Bethesda.  The moans of men and the bleating of sheep can still be heard in present-day Jerusalem, but the ruins directly below give testimony to a God who offers healing.  Not just healing for the body, but healing for the soul.  Healing from alcohol or gambling addictions.  Healing for a love-starved heart that tragically sought comfort in another’s arms outside of marriage.  Healing from a life-long habit of cursing or nagging.  Healing for any sin-sickness.

But first I must ask you a familiar question, “Do you want to be made well?”  Then look to the Lamb of God who takes away the sin of the world (John 1:29).