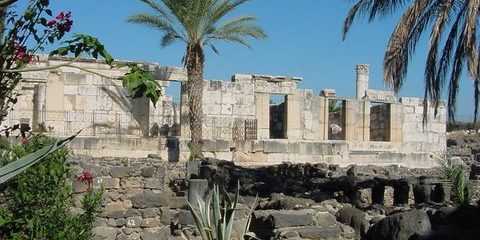 Matthew 8:15, “And He touched her hand, and the fever left her. Then she arose and served them.”

The silhouette of a lone gull glided peacefully above the undisturbed waters of the Sea of Galilee as Sabbath services concluded and worshippers headed home to await sundown and an evening meal of fish, fruit and wine. Finding a welcome bough in the “Village of Nahum,” the gull landed to catch its breath while an unnamed resident of Capernaum in the home just below its resting place lay in bed ravaged by a soaring fever.

Four fishermen and a former carpenter emerged from the synagogue, leaving behind an astonished congregation who marveled at the profundity and power of the day’s message given by the newly arrived young rabbi and miracle-worker from Nazareth who now headquartered his ministry in their bustling town. Having been invited to Andrew and Peter’s home for dinner, Jesus, James, John and their two gracious hosts learned upon arriving that Peter’s mother-in-law lay sick with a high fever. According to the accounts in Matthew 8, Mark 1 and Luke 4, her loved ones immediately requested help from “the Great Physician,” who with the soft touch of his calloused hands cooled her fiery brow and infused her exhausted frame with renewed strength. Restored and invigorated she rose to serve her family and her guests.

Miracles don’t always produce responsive hearts and grateful service—not even in the lives of those directly affected by the Master’s healing words or touch as sadly demonstrated by the story of the ten lepers wherein only one of the ten glorified God and thanked Jesus for his healing (Luke 17:11-19). Unfortunately, still today heaven’s hand can sometimes be followed by hardened hearts. The miracle of conception can be followed by a closed heart that speaks passionately about the “virtue” of choice. The miracle of birth can be followed by a harsh heart that abuses young lives with hostile words or closed fists.

Jesus performed many miracles in and around Capernaum where today only ruins remain of the city’s past glory. He restored the gravely ill servant of the philanthropic Roman centurion who built the city synagogue (Luke 7:1-10); healed the sick and the demon-possessed (Matthew 8:16-17); and gave life to a paralytic’s limbs (Mark 2:1-12); but despite his display of power and compassion most of Capernaum in time rejected the message of Jesus, prompting our Savior to compare their unbelief to that of the people of wicked Sodom, denouncing them with these words, “If the mighty works which were done in you had been done in Sodom, it would have remained until this day” (Matthew 11:23).

When the soft hand of our Savior touches your infirmity of body or soul, rise up and serve him. It may seem unlikely or even impossible that you could find the strength to serve him after all you’ve experienced. A nasty divorce, financial collapse, the loss of your soul mate or a lengthy hospital stay can sap your strength and your hope, but the carpenter’s hand brings healing and renewed vigor. Do not shrug at his majesty and glory only to fall in line behind Sodom and Capernaum on the day of judgment, but rejoice in his power and deity. Rise up to serve him. You will find the strength.