A frightening and harrowing world 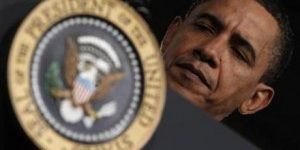 Barack Hussein Obama, the President of our United States of America, hates Israel and always has. He also hates America as it is presently constituted and he will work to bring down both the reconstituted Jewish state in its ancient and biblical homeland along with this glorious republic that is America.

Before and since coming to power, this president has surrounded himself with people like Rashid Khalidi, a one-time spokesman for the Islamist Hamas terror organization and offshoot of the Muslim Brotherhood:  In other words, those who are Islamic haters of Jews and Christians and whose followers have committed persecutions and slaughters down the ages – and still do.

As a mirror image to the Muslim haters of the Jewish people, Obama also has surrounded himself with people like the Rev. Jeremiah Wright whose perverted form of Christianity, along with elements of Replacement Theology, has also been responsible for anti-Jewish persecutions and slaughters down the ages.

As Mark Levin inferred in his Talk Radio program the other day, this Obama regime, the Democrat Party, and the grotesquely compliant Congress has made this world a much more dangerous place.

What are we to make, for instance, of our president calling the Turkish Prime Minister and expressing his condolences for the deaths of jihadist and Islamist thugs masquerading as “peace-activists” on board what I describe as “The Flotilla of Lies and Violence?” One word to describe Obama’s obeisance to the Turkish prime minister is: “shameful.”

But no outrage came from this president towards the activities of the Turkish leader who deliberately and cynically connived in sending a convoy of ships full of jihadists and their misguided supporters to aid and abet the murderous Hamas regime; a regime which calls for the genocide of the Jews in Israel and the destruction of the tiny and embattled Jewish state. For those “peace-loving activists” who were on board some of the ships, Lenin had a phrase for them: He called them, “useful idiots.”

Obama’s earlier outreach at Cairo to the Muslim world – a world of some 57 regimes, dictatorships, kingdoms, emirates and tyrannies, all stuck in the 7th century – was warning enough for those of us who still cherish the fundamental freedoms of expression, of the press, of free assembly, of religion and of the rights of women and minorities, that the United States of America has given us and the world.

These essential and divinely inspired freedoms do not exist in the Muslim world. Is it any wonder then that they hate us for not submitting to their rigid Islamic and Koranic strictures?

Let’s look at the Islamic, anti-Western IHH – the chief supporter of the flotilla to Gaza – which poses as a humanitarian relief fund (Turkish Humanitarian Relief Foundation), while supporting Hamas and several Jihadist organizations in Europe, the Middle East and North Africa.

IHH was involved with Ahmed Ressam, an Islamic terrorist, who attempted to smuggle 1,320 pounds of explosives and plant them at the Los Angeles International Airport.  According to French intelligence, Bulent Yildirim, the president of IHH, recruited “Jihadi warriors” and transferred money, firearms and explosives to Al Qaeda and other Islamic terrorists in various countries.

He also ran “peace convoys” from Syria into the Fallujah Triangle in Iraq; convoys which carried IEDs and weapons used to kill American soldiers. It would seem inconceivable for President Obama or his State Department not to know this.

So now we have the Muslim world predictably calling for Israel to be isolated, to be made into a pariah state for the crime of trying to defend itself. Add to it the nations of that charnel house called Europe, which has spewed upon the world stage Hitler, Stalin, Mussolini and before them an endless parade of monsters and despots. Most alarmingly of all, we now have the Obama regime and much of the western media siding more and more with the thugdoms and rogue regimes in this benighted, early 21st century world.

So inevitably Israel is being portrayed as brutal and unconcerned for the human rights of the militants on board the flotilla. Hamas and the many other Islamic terror organizations, who relentlessly commit unspeakable atrocities against the human rights of women and non-Muslims, are adept at masterfully playing the Western world, its press and governments, for the suckers they truly are.

The pro-Hamas flotilla of lies and violence was concerned not with genuine human rights but with providing the trigger and excuse for a future Arab and Muslim war of genocide against Israel. Just as Hitler’s Nazi regime systematically demonized the stateless and defenseless Jews as a precursor to the Holocaust, so the Muslim world and the immoral Europeans, and too many in America, repeat the storyline.

The end result is that Israel, as so often, is caught in a “No-Win” situation and must ultimately use force to stop the aggression and depredations of the Hamas terror organization. Whether Hamas and the Islamists unleash incessant rocket fire into Israeli towns and villages, kidnap Israelis, inflict terror attacks, or bring a flotilla of so-called “peace activists” to Gaza, Israel is brought to a position that it must act; to not do so is ultimately to commit national suicide.

It is worth repeating: Much of the mainstream press consistently refuses to accept or understand how they are being relentlessly manipulated by Hamas, Hezbollah, the Islamists and Jihadists.

We are witness today to the radical Left joining in an unholy alliance with the Islamic world and supporting the likes of Hamas, Hezbollah, Iran, Saudi Arabia, Syria – all Muslim groups and states that will crush the Left if the worldwide Islamic Caliphate ever comes to power: And all joining gleefully in the anti-Israel hate-fest.

If any advice can be given to Jewish Americans and others it is to jettison ties with a Democrat party that has lurched so far to the left that it is unrecognizable as the Democrat party of their parents and grandparents time. The same goes for those Catholic and Protestant Americans whose values also are now being betrayed by both this president and the Democrats in the House and Senate.

The only hope is for citizens to realize that in America this November the election for House and Senate members is the most crucial that America has perhaps ever faced. Without a massive brake on the power of Obama’s agenda – and on those who surround him – we truly face a frightening and harrowing world.

Victor Sharpe is the author of the two volume book, Politicide: The attempted murder of the Jewish state.