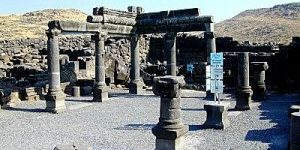 From the yellow sands of the Judean wilderness to the verdant hills below Mt. Hermon. From the rocky pastures of Bethlehem to the pebbled shores of Galilee. Jesus knew them all—his hometown of Nazareth and the busy fishing village of Capernaum where he also lived for a time. The muddy Jordan, the dates of Jericho, the stones of Jerusalem and the magnificent vistas atop Mt. Tabor. When I imagine the places where Jesus walked, I also see the faces of fishermen, awed by the power of their Master to still the storm. I hear the desperate cries of lepers and grieving parents. And still today I worship the one who silenced demons and conquered death as did so many before me in those storied locations of biblical fame.

But one location topped them all. Matthew 11:20 notes that Jesus performed ”most of His mighty works” in the little known village of Chorazin and its surrounding region. More miracles there than Nazareth. More miracles there than even in Jerusalem. Yet, the Bible records not one of them—a quiet reminder to the closing words of John’s gospel, which reads, “And there are also many other things that Jesus did, which if they were written one by one, I suppose that even the world itself could not contain the books that would be written” (21:25). The silence of the Bible, however, ironically pictures the dead silence of disbelief in Chorazin, for despite the performance of numerous miracles there, the only two references to Chorazin in the New Testament tell of the shocking condemnation by Jesus for their failure to repent after having witnessed the wondrous hand of God (Matthew 11:20-30, Luke 10:1-16). “Woe to you,” Jesus predicted.

On the heels of Jesus’ dire prediction for Chorazin the reader will also find an invitation. “Come to Me,” he adds, “all you who labor and are heavy laden, and I will give you rest” (Matthew 11:28). A country, a city or a soul finds rest through faith. What has God done in your midst? Restored your marriage? Spared your life? Protected your home? Blessed you with obedient children or with the job of your dreams? He has done many mighty works among us.

From the northern shore of the Sea of Galilee it is only a half an hour’s walk to a flat plateau amidst hilly terrain that today sits empty of life except for the occasional tourist who wanders among the woeful debris which hearty archaeologists have painstakingly assembled from all that remains of a once proud and unrepentant community. The ruins of Chorazin memorialize the dusty sadness of unbelief to which all of us are prone. Our country has been so blessed with freedom and prosperity, evident expressions of the blessings of God’s hand. He has done many mighty works among us. Do we believe or will we too soon see woe as suggested by the absence of America in biblical prophecy?

Are you tired? Beaten down? Losing hope? Remember Jesus’ words of invitation, “Come to Me . . . and I will give you rest.” Disbelief may end in ruin. Faith always ends in rest.