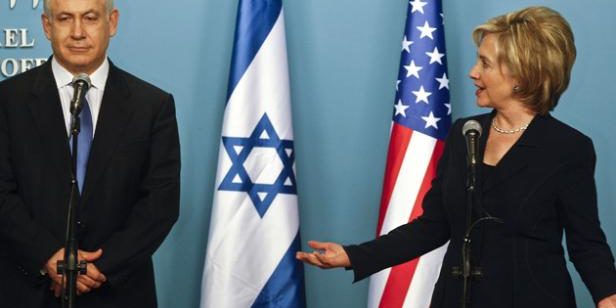 For most Christians, Lent is a season of penitence and devotion in remembrance of the events leading to Christ’s crucifixion. For Churches for Middle East Peace (CMEP), Lent is an organizing tool for rallying U.S. Christians against Israel.

CMEP is releasing a series of Lenten devotionals, culminating with the current Holy Week, that supporters are urged to disseminate to their local churches. Each devotional has an explicit or implicit critique of modern Israel or message of solidarity with Palestinians.

Members of CMEP include several eastern Orthodox communions, the Maryknollers and Franciscan orders, the National Council of Churches, the Quakers and Mennonites, and the lobby offices of Mainline Protestant denominations such as the United Methodists, Episcopalians, Presbyterians (USA), United Church of Christ (UCC), and Evangelical Lutherans.  CMEP partners with Friends of Sabeel, an American support group for Palestinian Christian liberationists who specialize in organizing U.S. Christians behind pro-Palestinian causes.

CMEP, which was founded in the 1980s, could perhaps be dismissed as just another old-style Religious Left group tenaciously espousing Cold War era liberationist causes. But calls for an ostensibly more impartial, i.e. less friendly, U.S. policy towards Israel have gained traction not just among oldline Protestants and social justice Catholics but also increasing numbers of liberal evangelicals, who want to distinguish themselves from the pro-Israel Religious Right.

Interestingly, CMEP is increasingly partnering with J Street, the relatively new political action group that wants to usurp pro-Israel Jewish voices.  In February, CMEP and J Street sent a joint letter to President Obama protesting Israel’s isolation of the Hamas regime in Gaza as an offense to “American humanitarian values” and a violation of international law. “We urge, therefore, that your administration use America’s unique relationship with Israel to persuade it to lift the closure of its border crossing with Gaza now,” CMEP and J Street, with several other groups, implored.  They also bemoaned Egypt’s closure of Hamas’ underground tunnels into Egypt, which are “lifelines” for Gaza, without mentioning their role as arms conduits, and without calling for any particular U.S. pressure on Egypt.

Last Fall, CMEP saluted J Street’s first annual conference, promising that “we at CMEP work closely with J Street and with the other Jewish, Arab and Palestinian peace advocacy groups.”  CMEP explained that it was “reviewing what we can do to mobilize urgently those in the nationwide Christian community who would actively support peace in the Holy Land,” and needing “help from all persons of good will,” offered salutations to “our J Street colleagues as we work together to create political space for bold U.S leadership to achieve a just, lasting and comprehensive peace in the Holy Land.”   A former chair of CMEP, who was also the former director of the Episcopal Church’s Washington office, was a featured speaker at the J Street event.

In February, J Street co-sponsored with CMEP a 5 person congressional delegation to the Middle East, led by U.S. Rep. William Delahunt (D-Mass.), which easily met with Palestinian and Jordanian officials but had trouble getting meetings with Israeli officials.

In a message last fall commending the new partnership with J Street, CMEP chief Warren Clark, a former U.S. Foreign Service officer, regretted that CMEP’s budget and staff are only about “one-tenth” of J Street’s and its list of supporters was only about one fifth of J Street’s.  While J Street is striving to neutralize strong American Jewish support for Israel, CMEP of course is hoping to undermine American Christian support for Israel.

The Lenten devotionals are a CMEP outreach ministry towards that goal.  One devotional is from a liberal Baptist, who likened Jesus’s struggles with temptations with Christians who “may be tempted to give up our vision of peace and justice” for the Middle East. “We may get so frustrated with the lack of progress and the ongoing crisis that we begin to think about accepting a short-term fix that ignores long-term consequences,” he warned.  He urged CMEP supporters to follow Jesus in facing down the “tempter.”

Another Lenten devotional from a CMEP staffer who is a United Methodist deacon cited St. Paul’s affirmation of “our citizenship in heaven,” contrasting it with the importance of “national citizenship” in lobbying Congress for “improving US policy to affect peace in the Holy Land.” An official with Catholic Relief Services pensively asked “how do we stop skipping the times of spiritual renewal that enable us to invite all people who care about the peoples of the Holy Land to God’s great, free banquet?”

More explicitly in his devotional, a UCC missions executive complained about “Israeli settlements, the separation barrier, conditions of refugees, and myriad aspects of occupation—as well as destabilizing and debilitating violence.”  He implored that “we, as North American Christians, who have deep ties with Palestinian Christians, respond” by demanding an end to “violence and occupation.” An official from the Maryknoller order was even more detailed in his devotional:  “As People of Faith and Justice, and citizens of a Nation supportive of Israel, are we not being called upon to speak out about the continuing siege and blockade of Gaza; about the thousands of homes there which cannot be rebuilt?”  The Maryknoller also lamented “dispossessed Palestinian families in East Jerusalem,” the “continued growth of the older Israeli settlements,” and “building restrictions” on West Bank Palestinians. “Are we not being called upon,” he concluded, “to speak out about collective punishment, and the continued construction of the Wall of Separation?”

In the final CMEP devotional for Easter, a Mennonite contrasts St. Peter’s call for “impartiality” with how “Western Christians have too often promoted the view that there is a chosen people in the Middle East and have used that belief to support unjust policies.”  Counteracting Zionist and other pro-Israel Christians perhaps encapsulates CMEP’s central mission.  Exploiting a Christian holy season like Lent to shift attention away from Christ’s passion and instead towards Palestinian liberation, with varying degrees of subtlety, may not be so effective. But CMEP may still be a useful ally to groups like J Street that will attempt to portray American Christian views towards Israel as, at best, ambivalent.