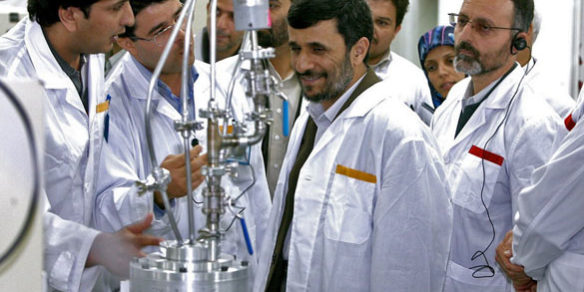 The European Union and United Nations’ attempts to stop Iran’s nuclear program have amounted to little more than wrist-slapping. After five years of negotiations – alternating carrots with sticks – the terrorist regime remains unpersuaded. Iran’s long-range-missile test and announcement that it possesses 6,000 uranium-enriching centrifuges were this summer’s demonstrations of the regime’s nuclear intentions. In reaction to the international paralysis, on the American domestic scene, harsher economic sanctions against Iran are being pursued on a number of fronts simultaneously. Calls to ratchet up the pressure on Iran are coming from the campaign trail, the U.S. Congress and state legislatures.

There are few issues the two U.S. presidential candidates agree on this election year, but the need for keeping nukes out of Ahmadinejad’s hands has been cited by each campaign as top priority. While Sen. McCain says the military option should not be taken off the table, he has called for a worldwide divestment campaign to get “people, businesses, pension funds, and financial institutions across the world divest from companies doing business with Iran.” Sen. Obama, often criticized for his willingness to hold direct negotiations with rogue states, has hardened his stance on Iran, calling for an international divestment effort modeled after the 1980s campaign against apartheid in South Africa.

In July, the Senate Banking Committee passed a bipartisan bill to expand economic and trade sanctions against Iran, authorizing divestment from companies conducting business with Iran’s oil sector. According to Sen. Chris Dodd, chairman of the panel, the bill also “helps to prevent the illegal diversion of sensitive U.S. technologies to Iran.” The legislation encourages state and local governments to divest from companies investing more than $20 million in Iran’s energy sector. Companies affected by such divestments include Royal Dutch Shell, Spain’s Repsol, Italy’s ENI, and France’s Alcatel and Total.

In the last year, there has been a flurry of activity in U.S. state legislatures requiring states to divest from companies that actively work with terrorist countries as designated by the U.S. State Department (Iran, Sudan, Syria and Cuba). Of these countries, Iran has the largest GDP and stands the most to lose. Thus far, 11 state legislatures have voted to divest their public-pension and retirement funds from Iran. For states like California, this means withdrawing an estimated $2 billion in funds tied up with Iran. Michigan was the most recent state to pass a comprehensive divestment plan that included timetables. Twenty more states are considering similar divestment proposals to supplement federal and international sanctions.

Varying degrees of sanctions have been imposed on Iran since 1979, but the new wave of U.S. divestment and talk of “world divestment” seeks to totally isolate Iran economically. The tightening of sanctions by the U.S. Senate and the expansion of sanctions by states are encouraging to be sure. Divestment, however, can also be implemented on an individual and congregational level. No matter the size of your portfolio or pension, we should all make our investments “Iran-Free” and “Terror-Free.” Send a letter to your investment manager about divesting your personal investments from Iran. Contact The Jerusalem Connection (info@tjci.org) if you would like a sample letter to send to your investment manager or if you would like to see a list of all the international companies known to invest in Iran’s Oil and Natural Gas sector.