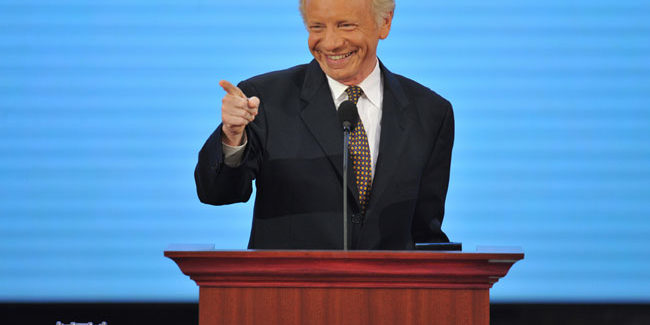 Everyone agreed—the moment was electric. The climate, context and occasion were perfect. Who could say it better and with greater poignancy? The occasion was Christians United for Israel’s National Night to Honor Israel in Washington, D.C., on July 22, 2008. With quiet authority, Sen. Joe Lieberman stood and announced, “I am your brother Joseph.” Wow! Did he say what I think he said? Is he saying he is a brother to thousands of Christian Zionists gathered at this conference? Right then, the benediction could have been pronounced. All could have gone home blessed beyond their greatest expectations.

The identification was obvious—at least to those who know their Bible. Joseph, a son of Jacob, now the vice-regent of Egypt, had been abandoned and sold into slavery by his own brothers. Years later, when famine and hard times hit, Joseph’s father Jacob sent his other sons to Egypt to buy food. Joseph identified himself to his brothers, provided food and, thus, saved Israel.

Perhaps Sen. Lieberman meant that, although Christians have not proven to be “good brothers” throughout much of history, now in his place of power, he can say he is one with us. He might have been alluding to being abandoned by many of his biological brothers and his “brothers” in the Senate after questioning the Bush administration’s “Road Map to Peace” and endorsing Sen. John McCain for president. (Although he was forced to run as an Independent in the last election in his home state of Connecticut, because of a lack of Democratic support, he returned victorious to the Senate.)

When Sen. Lieberman said, “I am your brother Joseph,” he was not disavowing his Jewish brothers or other Jewish politicians; his words spoke blessing and bonded him with his “in-grafted” Christian Zionist brothers. Few missed the importance. The senator then added, “You have come to Washington as Americans of faith with a purpose. You are Christians, united for Israel. May God bless you for, and in, your work.” Indeed, the senator’s statement was both given and received graciously. Sen. Lieberman said he was strongly advised not to attend this meeting, yet both his presence and his speech confirmed recognition of an incredible phenomenon occurring today.

The name Christians United for Israel speaks for itself. However, history and even eternity may well record that the most important contribution CUFI (under Pastor John Hagee) has made has been to deepen the trust and broaden the support of the Jewish people for Christians, and especially for Christian Zionists. Scurrilous attacks by some of the “Medianites” (the press) on Pastor Hagee have served only to mobilize Jewish support further. This only helps to close the gap and to strengthen the ties between Jews and Christians as together we face the perilous times ahead—and those times may be closer than we think.

Is the confirmation of the covenant coming soon?

A picture of Sept. 13, 1993, is still indelibly etched in my mind. Pres. Bill Clinton hosted Israeli Prime Minister Yitzhak Rabin and Yasser Arafat, representing the Palestinians, on the south lawn of the White House. President Clinton was confirming the Oslo Accords on which Rabin and Arafat had just agreed. It was an event that had the possibility of huge Biblical implications—“In what way?” some might ask.

Thousands of years ago, the prophet Daniel wrote of a future covenant/agreement that would be confirmed by a world leader (called Anti-Christ in I John 2:18 and Man of Lawlessness in II Thessalonians 2:8). The covenant would be with Israel, among others, and would begin Daniel’s last prophetic period of seven years (Daniel 9:27). The prophet adds, “In the middle of the seven [-year period, or after three-and-a-half years], he will put an end to sacrifice and offering. And on a wing of the temple he will set up an abomination that causes desolation, until the end that is decreed is poured out on him.” Jesus refers to this same “abomination of desolation” in Matthew 24:15. Two partial fulfillments of this prophecy occurred—with Antiochus Epiphanes in 168 B.C. and with Titus in A.D. 70. However, the specific prophecy Jesus referred to will be immediately followed by a time of “great tribulation unequaled from the beginning of the world until now—and never to be equaled again” (24:21). Jesus said, “Immediately after the tribulation of those days … the sign of the Son of Man will appear in the sky” (24:29). Messiah becomes the Closer—He comes in power and glory!

To summarize, the seven-year countdown to the Messiah’s coming begins with the confirmation of a covenant/agreement made between Israel and others. The obvious implication is that a Temple or worship system is built and that sacrifices are offered during the three-and-a-half years leading up to the “middle of the seven.” It is then that a World Leader installs the “Abomination of Desolation.” The final three-and-a-half years leading up to Armageddon and Messiah’s return will be a time of unprecedented tribulation in the world.

When the world saw President Clinton confirm a covenant/agreement between Prime Minister Rabin and Yasser Arafat in 1993, many of us asked, “Is this it? Is this the confirmation of Daniel’s 9:27 covenant?” Obviously, it was not.

Now, comes President Bush with a full court press for an agreement between Israel and the Palestinians—one he can confirm by the end of his administration in 2008. Both Prime Minister Olmert of Israel and President Abbas of the Palestinians say it is unlikely such an agreement, especially concerning Jerusalem, will be reached in 2008. Still, Condoleezza Rice relentlessly pursues “the contours of an agreement” before the end of the Bush administration. Will this begin the countdown? Only time will tell. Perhaps it will be the next president, building on this administration’s efforts, who will confirm the covenant. Or it might be another world leader in another place at another time.

Jesus said this: “No one knows about that day or hour, not even the angels in heaven, nor the Son, but only the Father” (Matthew 24:36). But this we do know—there is a divinely appointed countdown to come. It will begin when a world leader confirms a covenant or an agreement between Israel and others. Shortly after, we should expect to see the building of a third Temple or a Holy Place where an altar and a sacrificial system will be reinstituted.

Therefore, watch for a confirmation of a covenant, remembering Jesus’ words, “When these things begin to take place, stand up, lift up your heads, because your redemption is drawing near” (Luke 21:28). This is not a time to despair. It is a time to watch and to pray. It will be a time for Jews and Christians to stand even closer together, as our brother Sen. Joseph Lieberman so eloquently reminded us—looking for the coming of Messiah.