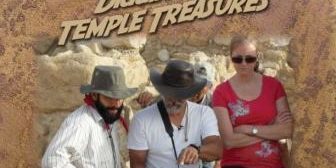 The Holy Grail, the Ark of the Covenant, Atlantis, the Philosopher’s stone.  Whether the objects of legend or reality, certain ancient mysteries arrest the imaginations of every generation.  They are antiquities that refuse to be forgotten—remaining hidden enough to evade discovery but historically prominent enough to leave a smattering of clues.  Many an explorer has fallen prey to the treasures’ siren call, spending their lifetimes searching for the relic that promises to alter minds or bring great riches.

The Copper Scroll is a relative newcomer to the modern treasure hunt.  Part of the Dead Sea Scrolls collection, the Copper Scroll is unlike any of the papyrus documents, though not only for its copper plates.  The Scroll reads like a treasure map, listing sixty-four hiding spots where tithes and vessels thought to be secreted from the Jewish Temple were stored for safekeeping.  Over fifty years after archeologists found this unique copper document in a Qumran cave, only three explorers have dared to chase after the Scroll’s prize and only one whose search continues.

Explorer Jim Barfield believes he is the first to successfully interpret the mysterious text.  According to Barfield who is now working with the Israel Antiquities Authority (IAA), hoards of Temple wealth lurk buried underneath one of Israel’s most famed archeological sites.  Hundreds of tourists each day unknowingly walk over holy Temple items and at least sixty tons of Temple gold and silver.

Before Barfield, two men are on record for conducting archeological digs in search of the items listed in the Copper Scroll: John Allegro and Vendyl Jones.  Both men risked their careers and reputations to dig for treasure that they had no guarantee still remained.

Allegro, a British scholar known for his controversial opinions on religion, was one of the original members of the publication team for the Dead Sea Scrolls, and the first to translate the Copper Scroll.  Allegro believed two dozen of the Scroll’s locations were in the area of the Jerusalem Temple and the rest were near Qumran.  In 1959 Allegro excavated tombs in Jerusalem’s Kidron Valley that he thought could be the same “Zadok’s tomb” mentioned in the Scroll.  He applied for a permit through the Jordanian authorities to dig beneath the Temple Mount but was denied.  Allegro then organized an expedition to Hyrcania, a Herodian fortress near the Dead Sea which had never been professionally excavated.  Allegro linked the ruins to his translation of the first line of the Copper Scroll: “the fortress in the Valley of Achor.”  At both sites Allegro lacked the proper equipment and stopped short of making a discovery.  His colleagues from the Scrolls publication team openly criticized Allegro’s naïve ambitions and love for publicity.

Vendyl Jones, a former Baptist minister from Texas rumored to be the inspiration for Spielberg’s Indiana Jones, has spent the last thirty years in search of the Copper Scroll treasure.  Jones has a unique take on the history of the Scroll, believing it dates back to the first Temple period and that the treasure includes the Ashes of the Red Heifer, Breastplate of the High Priest, and the Ark of the Covenant.  Most academics believe the treasure is Second Temple period and that the Scroll never directly references those three Temple items.  According to Jones’ translation, the key landmark in the Copper Scroll is “the Cave of the Column” which he identified as a cave adjacent to Qumran that appears to have natural rock columns on its façade.  Since 1972, Jones has conducted eight excavations at the site, all funded through donations from private individuals and staffed by volunteers.  In a lifetime of searching, Jones found one small intact vessel in 1988 which he claims was part of the Copper Scroll treasure.

Although Jim Barfield’s excavation sites are very close to Allegro’s fortress ruins and Jones’ columned cave, he has interpreted the Copper Scroll in a way that is entirely his own.  A retired fire marshal from Oklahoma and award-winning arson investigator, Barfield cracked the code on the Copper Scroll two years ago while sitting in his home office.  After meeting Vendyl Jones and hearing his unique history on the Copper Scroll, Barfield woke up one morning and decided to look at the Scroll.  He had seen a translation years before and thought it was boring—“nothing but a list of kosher metals” Barfield says.  This particular morning, though, he happened to have on his desk an aerial photograph of Qumran which he claims he still can’t remember putting there.

While Barfield was reading the Copper Scroll translation from F. Garcia Martinez’s The Dead Sea Scrolls Translated, he glanced at the map and noticed that in Qumran there were several sites that seemed to match the Scroll’s descriptions.  Qumran had stairs leading east, cisterns, aqueducts, a peristyle, and a double entry pool.  Going into investigator-mode, a mode he has worked in for the last twenty years, he says “I started matching up the fingerprints between the Scroll and the Qumran map and within five minutes realized this was more than coincidence.”

Over the next six months he worked tirelessly to identify the sixty sites, all in or around Qumran.  For his research on the Scroll he prepared an investigative report no different in style than what he would’ve produced as the logistics officer for the Oklahoma City Bombing, except, of course, for the ancient Hebrew and Israeli maps.   He felt a burden of information but had nowhere to take his research, “I had no contacts in Israel, no credentials, no university backing, and no idea how the archeological process worked in Israel.”

Barfield and his wife took their first trip to Israel to visit Qumran and to meet with anyone who would listen and potentially help.  Despite his lack of credentials and unorthodox approach, the report was so convincing that he moved rather quickly up the ladder.  “Everyone who read the research just thumped their heads and moved me to the head of the class,” Barfield recalls.  Finally Barfield got a meeting with IAA director Shuka Dorfman.  Before Barfield could finish presenting the first five sites, Dorfman was hooked and had his top archeologists on the phone to organize a meeting.

At the Rockefeller Museum in Jerusalem, Barfield laid out his full research to Dorfman and the two IAA archeologists in charge of Qumran, Yitzhak Magen and Yuval Peleg.  Magen was a bit skeptical at first.  He told Dorfman, “We have dug all over Qumran.  This stuff isn’t there.”  Barfield, knowing the enormous depths specified in the Copper Scroll, asked “Have you ever dug below virgin soil?”  Magen admitted they hadn’t and Peleg, staring at the maps, said “I think he’s got something here.”  Peleg, with Magen’s consent, agreed to be the archeologist for the excavation.  Barfield was thrilled.  This not only meant he had one of Qumran’s main experts leading the dig, but that he would also bypass the usual red tape to apply for a permit.  Magen and Peleg are the authorities who give permits for Qumran, and they don’t make it easy.

By April 2009, Peleg was ready for the first phase of excavation and Barfield flew to Israel.  In three days they tested three of the sixty sites about thirty percent of the way.  A minor disagreement occurred between Peleg and Barfield about the depths they should test.  Since the Copper Scroll mentions depths of eight to ten feet, Barfield felt they should go at least that deep.  Barfield returned to the states after the first dig under the impression that when he returned for the second phase they would go deeper at the three sites and test more of the locations in the Qumran complex.  However, since April Barfield has not heard anything from Peleg, or anyone at the IAA.  He has called, sent emails, mailed letters; all have gone without a response.  All Barfield knows is that the permit, under Peleg’s name, is still active and the three sites have not been filled back in.

Until the dig stalled in April, Barfield chose to keep a very low profile about his research, preferring the sites to be kept secret so the dig would not be jeopardized.  Three months after the first dig and no communication, Barfield is going public with the information because he feels he has no other choice.  “I only want these items to be found,” Barfield answers when asked about his motives.  “Even if I read in the news one day that the IAA did it without me, I would be glad that the items were returned to Israel.”

Barfield was not the first to connect Qumran to the Copper Scroll locations.  Allegro and Jones came very close in their excavations.  But several academics have also made the association in their research.  Jodi Magness in her book The Archeology of Qumran says Secacah, a term listed four times in the Copper Scroll, is an ancient name for Qumran.  The scholar Hanan Eshel made a similar argument.  Barbara Thiering believes the first twenty-one items in the scroll were hidden at Qumran.  In a paper for the International Symposium on the Copper Scroll (1996), Thiering presents a scenario where the Essenes offer Herod the deserted buildings of Qumran as a place to store his bank account.  In this way, they might curry his favor and he would consider their plans for Temple remodeling.

Even though explorers and academics have tiptoed around the idea of Qumran as a possibility for the Copper Scroll treasures, Barfield is the first explorer to say that all the locations are in Qumran.  He is also the first to pinpoint the exact hiding spots, build a full investigative report, and pursue an excavation in the Qumran ruins below the earliest level of habitation.  The reason why his theories are so striking is not because of their complexity, but because they are so plainly obvious.  That’s why Barfield says no one proclaims him a genius when he presents the report; “most people just thump their heads.”  Philosopher Kahlil Gibran has said, “The obvious is that which is never seen until someone expresses it.”  Perhaps someone has finally expressed the obvious in the Copper Scroll mystery.  Let the digging begin.

Shelley Neese is managing editor for the The Jerusalem Connection Report.