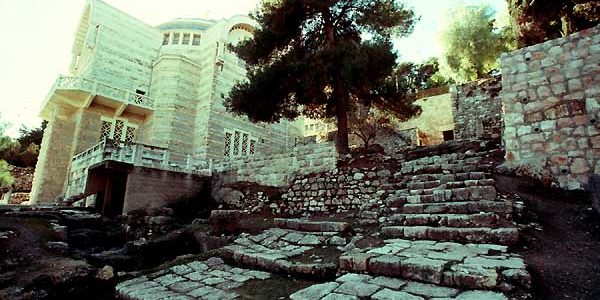 1 Peter 2:6, “Therefore it is also contained in the Scripture, ‘Behold, I lay in Zion a Chief Cornerstone, elect, precious, and he who believes on Him will by no means be put to shame.’”

Rock Hudson played a steady submarine captain in the 1968 film, Ice Station Zebra; Rocky Balboa, the underdog boxer from Philadelphia, went the distance with Apollo Creed in Rocky which debuted in 1976; and more recently the big screen has introduced yet another marvel of brawn in the 2002 film, The Scorpion King, starring a desert warrior known simply as The Rock. But long before movies and strong leading men there lived another tough guy named “Rock.” Two thousand years ago when Jesus chose a Galilean fisherman to join his ministry team, Jesus changed his name from Simon, meaning “Hearing,” to Cephas, meaning “Rock.” Most know Cephas by another form of his name—Peter—which also means “Rock.”

For three years Peter stood resolutely with Jesus. When others questioned the identity of Jesus, Peter confessed him as Christ. When others hesitated, Peter stepped out of his fishing boat to walk on the water to Jesus. When others froze in fear, Peter drew his sword to defend his Master from armed men. But now, pacing anxiously in the chilly night air and eager to learn of Jesus’ fate, Peter pressed close to the blazing fire in the courtyard that warmed other curious citizens, the attending servants of the residence and even the officers who brought Jesus under guard from the Garden of Gethsemane to the high priest’s home for a secret examination and illegal nighttime trial. Peter the Rock would soon fracture even while Jesus, our Chief Cornerstone (Acts 4:11), would fail to crack under the intense interrogation and the hate-filled accusations hurled at him by Jerusalem’s leadership that had hastily assembled inside Caiaphas’ home under the cover of darkness.

Peter’s northern accent and attire caused him to stand out to the courtyard crowd, leading to a dangerous question from one of the servant girls and to a destructive response, “’You are not also one of this Man’s disciples, are you?’ said, ‘I am not’” (John 18:17). Having overheard the question, nearby soldiers laid their hands across their sheaths ready to arrest the accused. Jesus’ disciples had eluded the soldiers in Gethsemane and detaining at least one now would minimize the sting and embarrassment of having allowed all twelve to escape earlier in the evening. Hearing the stranger’s denial put the soldiers back at ease.

Over the next couple of hours, however, two more questions would challenge the Galilean fisherman, including, “Did I not see you in the garden with Him?” (18:26). After each accusation Peter denied any association with Jesus until a final denial shattered the Rock into pieces, releasing a torrent of tears that poured down Peter’s quivering jaw. He could never have imagined denying his Master. He could never have imagined falling so low. Only hours earlier he had confidently affirmed, “Lord, I am ready to go with You both to prison and to death” (Luke 22:33), but now Peter had done the unthinkable.

1 Corinthians 10:12 warns us all, “Therefore let him who thinks he stands take heed lest he fall.” Sometimes submarine captains falter during a mission, boxers hit the canvas hard and warriors face defeat. Sometimes disciples deny their Master. Sometimes a Christian lets dust collect on his Bible, stays home a bit more often from church or even brushes aside questions about her faith in the Lord, feeling pressured, embarrassed or fearful.

Today a short walk southeast from Zion Gate in the Old City of Jerusalem will bring one to the modern Church of St. Peter in Gallicantu. Almost hidden by the slope of the hill and surrounded by large shade trees the church with its adjoining balcony provides a glorious view of the City of David and the three valleys that shape this historic countryside. Hardly a fitting place for devilry and denials, the church memorializes the tragedy that took place there one chilly April night so long ago. But Peter’s tears and the Lord’s forgiveness would later transform him into a powerful teacher and evangelist despite his shocking denials in the courtyard of Caiaphas.

You too can know the forgiveness of God. You can find strength following a setback. How? By turning to the unbreakable Rock, our Chief Cornerstone, the Lord Jesus Christ.