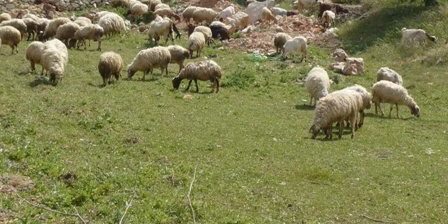 Birth Announcement to the Shepherds

Luke 2:10, “Then the angel said to them, ‘Do not be afraid, for behold, I bring you good tidings of great joy which will be to all people.’”

Sheep frighten rather easily; that’s why they need shepherds. A rabbit, a snake, any wild animal or even a stranger can create sudden panic. But this day it would be the shepherds themselves who would need reassurance following a scare.

Not far from the walled city of Bethlehem a group of shepherds and a flock of sheep slept under a typical, Judean, night sky. One shepherd, keeping his usual two-hour watch, passed the time with musings and counted sheep to stay awake just as the young David would have done on these very same limestone hills one millennium earlier. Figs, wine, milk and honey surrounded him on three sides; the desert loomed to the east, making him wish he had been born in the watered hills of the Galilee, but drier nights meant fewer ticks, flies, mosquitoes and mites, and in that he found comfort. His hands, calloused from clearing the pasture of rocks, roots and stumps by day, loosely gripped his rod by night, ready in an instant to arouse the others in defense of the sheep. His mind retraced its steps to the days of David and then further back to the stories of Moses, who too had known the daily duties of shepherd life, though many miles southwest of Bethlehem in the rocky crags of Midian. God chose the clumsy-talking Moses to deliver his countrymen from slavery and also exalted David to the throne of Jerusalem. How marvelous that God could use shepherds—outcasts of society like himself—to serve such a heavenly purpose!

Suddenly the brave shepherd swallowed his thoughts and melted with fear as the darkness erupted with light. His awakened companions likewise froze at the sight of an angel with tidings to share. Reassured by the angel’s words and eager to meet their newborn Savior, they searched throughout Bethlehem until they found him. Banned from worship in the temple for being ceremonially unclean, the shepherds now freely worshipped on their knees beside a manger in a stable. Beside the Good Shepherd. Their fear replaced by joy.

Today in the shallow soil of a small Arab village just east of Bethlehem town, two churches stand where shepherds once stood—one Greek Orthodox and one Roman Catholic—but both a memorial to the events that took place in “The Shepherds’ Field” so long ago.

Sheep frighten rather easily; that’s why they need shepherds. We too frighten easily; that’s why we need a Shepherd, but whether you fear the future, known or unknown; rejection and loneliness; growing up; growing old; financial ruin; or a fear that you cannot find words to describe; remember the words spoken in a shepherds’ field, “Do not be afraid, for behold, I bring you good tidings of great joy which will be to all people. For there is born to you this day in the city of David a Savior, who is Christ the Lord” (Luke 2:10-11).