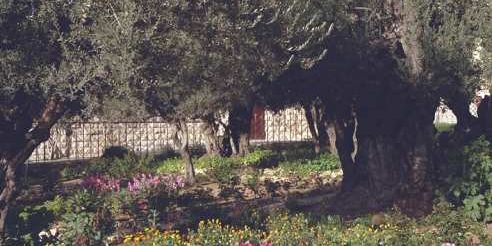 The Betrayal of Jesus

John 18:11, “Then Jesus said to Peter, ‘Put your sword into the sheath. Shall I not drink the cup which My Father has given Me?’”

A few key events in Scripture have taken place in gardens, including the manipulation of Adam and Eve by Satan in the Garden of Eden; the betrayal of Jesus by Judas in the Garden of Gethsemane; and the redemption of mankind by Jesus who defeated sin and death with his resurrection from a garden tomb. God once enjoyed fellowship with Adam, walking through the Garden of Eden in the cool of the day (Genesis 3:8), and Jesus enjoyed fellowship with his disciples, often resting, conversing and praying together in the olive orchard of Gethsemane just east of Jerusalem before making that final leg-burning climb up the steep western face of the Mount of Olives at the end of each day on his return trip to Bethany where he and the disciples regularly lodged with friends.

During the day farmers in Gethsemane stayed busy pressing out the olives, but at night the garden remained quiet—a perfect place of peace to unwind and find refreshment. The prophet Jeremiah likened joyful hearts to “a well-watered garden” (Jeremiah 31:12), but with only a few hours separating Jesus from the cross, even lush Gethsemane seemed to press his very soul to pulp. On a hill called Calvary Jesus would experience the suffocation of crucifixion, gasping for every breath and feeling the eternal weight of the sins of all men. The physical and spiritual pain in combination would pound his body and soul more than words could possibly describe, but after praying on his knees in the garden he determined that he must trust his Father—he must “drink the cup” of suffering from his heavenly Father’s hand (John 18:11).

Judas Iscariot would soon enter the garden, for he knew the place well. He would betray his master with a kiss for thirty silver pieces. He would come with a detachment of troops as if Jesus was a dangerous thug or an enemy of the state. Luke records Jesus’ response to their massive show of force, “When I was with you daily in the temple, you did not try to seize Me. But this is your hour and the power of darkness” (Luke 22:53). The power of darkness would achieve an apparent victory. The gates of hell would cheer in short-lived triumph, not understanding the role of Jesus’ suffering in God’s perfect plan—not understanding the futility of self-will. Even Peter would show his short-sightedness by drawing out his personal dagger to repel the armed puppets of the prince of darkness. But calmly Jesus instructed Peter, “Put your sword into the sheath. Shall I not drink the cup which My Father has given Me?” (John 18:11). But why? It made no sense in the moonlight of Gethsemane. Only the morning light of resurrection some three days from then would bring meaning to it all.

Today in Jerusalem a garden still flourishes inside the gates of the classically styled Church of All Nations which sits at the western foot of the Mount of Olives. Three of the olive trees in the garden have been scientifically dated at over two thousand years old, making them silent witnesses to the suffering of our Savior so long ago.

Sometimes our heavenly Father too asks us to drink a cup of suffering—trials or betrayals that make no sense in the moonlight. But trust him nevertheless and you will come to know the power that defeats darkness and the power that will give you perfect peace.