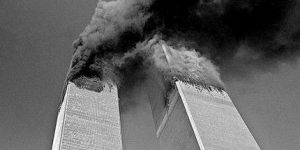 The fourth possible reason for America being further weakened is attacks within our borders from our enemies. It was said in the past that America had two great friends, the Atlantic and the Pacific. The point of the comment was that America was protected from the wars in Europe by the oceans. That was before jet planes and suicide bombers.

The call of jihad from the radical Muslim terrorists is, “Today we fight the Saturday people, tomorrow the Sunday people.” Israel is the Saturday people who, for over 50 years, have experienced the front-line wrath of jihad because Israel lives in the neighborhood of the jihadists. On 9/11, the Sunday people (Christian America) were awakened to what Israel experiences everyday. The events of 9/11 changed the world and changed our way of life as Americans.

No matter how much we try – it is impossible to secure our borders. There is no way we can keep out terrorists that are coming into our country. Even worse, it seems our government is inviting them to live among us. And once in our country, it is relatively easy for determined terrorists to weaken America through more bombings. America is a big, easy target. It is not a matter of if we will have another 9/11, but when.

There are many terrorist “sleeper cells” already in America. They are not sleeping but are waiting for the right moment to activate their cell and cause great destruction. Included in this vast Islamic terrorist network are groups that are becoming household names such as Hamas, Al-Queda, Islamic Jihad, Hezbollah, Muslim Brotherhood and others. They all have the same goal which is the destruction of the “Great Satan” America. Some of these groups probably already have nuclear “suitcase bombs” that have been smuggled into the country. They only need to detonate one of these to bring America as we know it to an end.

In addition to this violent threat, there is also the internal threat of radical Muslims who have infiltrated every aspect of our society including our military, our political organizations, our prison systems, our homeland security, our universities, our business, etc. They operate under the cover of our political correctness, our freedom of speech, our generous laws of charitable giving, etc. to use their influence at the highest levels of American society.

A fifth event that could dramatically weaken America is an external attack from our enemies. Whenever possible, nations at war attack their enemies when they are perceived to be weak internally. If America has an economic collapse as well as a continued moral collapse, our enemies will see this as an opportunity to attack us. But who would dare attack America – seeing that we are far superior militarily to any nation?

The answer is Russia and possibly a nuclear Iran. When the Soviet Union collapsed, Russia remained in tack with thousands of nuclear weapons. While they are weak economically and militarily, they are recovering and their nuclear weapons make them a threat to our survival.

Neither Russia nor Vladimir Putin is our friend. Russia is actively working to arm Syria and Iran with nuclear weapons because they want to reassert their influence in the Middle-East. Russian nuclear scientist and technicians are in Iran and Syria assisting them in developing weapons of mass destruction with Israel as the target. Russia is building a modern naval base in Syria to be operated by Russians. They have attack submarines deployed off our East and West coasts armed with enough fire power to destroy America. Now they have an open invitation to our backyard from their new friend in Venezuela.

Most Bible scholars believe Ezekiel 38-39 is talking about Russia as the nation that will lead an end-time confederation against Israel. I believe this will be a Russian/Turkey/Iranian led coalition. At the time of that invasion, Ezekiel 39:6 says that “fire will fall on those dwelling safely in the coastlands.” I wonder who this could be. Who do you think the prophet is speaking about? The Scripture could be referring to America. Whatever the details, I don’t believe the Almighty will allow Americans to go about their business as usual when Israel is being attacked. Do you?

Dr. Richard Booker is a bestselling author and speaker and the Founder of Sounds of the Trumpet and the Institute for Hebraic-Christian Studies. He is a contributing editor for the Jerusalem Connection. To invite him to speak to your congregation or conference and to learn more about his work, see his web site at: www.rbooker.com. This is the first of six articles on America in Bible prophecy. The articles are excerpts from Dr. Booker’s new book, “The End of all Things is at Hand—are You Ready?” To get the full text, order this book directly from Dr. Booker’s web site at www.rbooker.com.