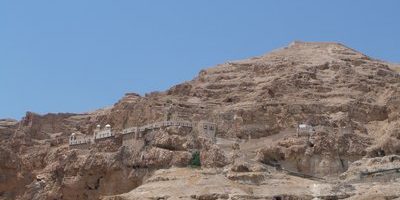 The famed author Herman Melville spent eight days in Jerusalem in 1857 and, overwhelmed by her stony landscape, he wrote often of it in his diary. In one such entry he laments, “Stones to right and stones to left . . . stony tombs, stony hills & stony hearts” (Jerusalem: City of Mirrors, Amos Elon, p. 11). Yehuda Amichai, a modern Hebrew poet and lifelong resident of Jerusalem, adds succinctly, “All these stones, all this sadness” (Elon, p. 12).

Not surprisingly, the Bible records piles of stories that include rocks and stones. In the Old Testament rebellious children suffered death by stoning. Moses struck a rock and water gushed forth. The patriarch Jacob chose a stone for a pillow one night in Bethel during his journey north to find a bride. Somewhere near Jericho Joshua built an altar of stones after crossing the Jordan River and before conquering the Promised Land. Jesus tells the well-known story of the sower whose seed falls in the stony places and of the wise man who built his house upon the rocks. Jesus also promises Peter that on “this rock I will build my church.” Peter calls Jesus “a living stone.” The traditional site of the death and burial of Jesus, today marked by the Church of the Holy Sepulchre, stands next to an ancient rock quarry. Following the burial of Jesus, they roll a stone in front of the tomb. Today the Jews worship at the Western Wall, built with ancient stones, and the Muslims call their controversial mosque in Jerusalem, “The Dome of the Rock.” One day in heaven God will even give overcomers a white stone with a new name written on it.

Smothered in limestone and chalk rocks, the city of Jerusalem lies on the edge of the barren Judean wilderness—a desert populated by these ubiquitous stones. Traveling through this wilderness region, one can almost come to hate the stones. They become your foe. They mock you in your hunger and exhaustion.

In Luke 4:1-4 the devil tempts Jesus to turn these stones into bread. After forty days in the dust and flame of the Judean wilderness his Father had provided nothing for him to eat. Had God abandoned his own Son? After all, the children of Israel had traveled around in the desert for forty years, and God cared for them with a cloud by day to block out the scorching sun and with a pillar of fire by night to keep back the cold desert nights. He also provided sustenance. Water came from rocks. Manna floated down from the skies. Quail flew in off the horizon.

Satan prods Jesus to solve his hunger problem apart from God’s leading, but calmly, knowingly, Jesus quotes Deuteronomy 8:3, “Man shall not live by bread alone, but by every word of God.”

Today just to the west of Jericho stands Jebel Quruntul, commonly called the “Mount of Temptation,” where you will find a monastery clinging to the side of the mountain—the traditional site of Satan’s temptation of Jesus to turn the stone into bread. That monastery stands as a testament to our Savior who stood strong in the face of temptation, withstanding it with the truth of God’s Word.

The stones may be crying out for you to doubt God—“He has abandoned you”—“You only thought he cared.” But believe God’s Word. He does care for you (1 Peter 5:7), and he will provide all your needs (Philippians 4:19).