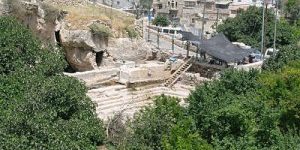 God promised his chosen people that one day he would send them a Servant, the Messiah, their Deliverer. How would they know when the Servant had arrived? According to prophecy, he would “open blind eyes” (Isaiah 42:1, 7). So, when the apostle John pens his account of the life of Jesus some eight hundred years later and includes in it the story of Jesus healing a blind man and sending him to wash in the Pool of Siloam (John 9:1-41), John clearly understood the implications of that event. Without question he intended to convince his readers that “Jesus is the , the Son of God” (20:31). John hoped they would believe in Jesus. In his gospel John records the story of the healing of the blind man—the sixth of seven key events in the life of Jesus, all meant to convince his readers of the divinity of Jesus.

Cornered by a group of religious critics who demanded a play-by-play recounting of the miracle, the man in John 9 responded to them with these words, “ put clay on my eyes, and I washed, and I see. . . . Since the world began it has been unheard of that anyone opened the eyes of one who was born blind” (9:15, 32). Isaiah prophesied that God would send a Giver of Sight, and the man who received his vision at the Pool of Siloam had encountered him, exclaiming unabashedly in subsequent worship, “Lord, I believe ” (9:35, 38).

A Drudge Report headline of August 9, 2005 announced with understated brevity, “Biblical Pool of Siloam is Uncovered in Jerusalem.” City workers, scurrying to repair a sewage pipe near the south end of the Kidron Valley before the onset of winter, unexpectedly uncovered the remains of what archaeologists immediately knew to be the biblical Pool of Siloam. This spring-fed reservoir served as a popular gathering place for Jewish worshippers in Jesus’ day who made their annual pilgrimage to Jerusalem for the Feast of Passover, and it served as a backdrop for the story of Jesus’ healing of the man born blind. The trapezoidal-shaped pool, only partially unearthed at the present time in an ongoing excavation, measures 225 feet wide on one side, much larger than most had imagined, with three tiers of five steps each, providing easy access into the water. Coins found at the site, some buried in the plaster of the pool and discovered only with the aid of metal detectors, confirm a New Testament date for the ancient stone structure. Following the destruction of Jerusalem by the Romans in A.D. 70, the pool fell into disuse, and layers of mud slowly overwhelmed the site until the pool’s location faded from memory, awaiting its surprise discovery last year.

The critics, who once argued that Moses could not have written the book of Genesis because writing had not been invented until many years after his death, have now been proven wrong by the evidence of advanced writing techniques in Moses’ day. Other critics, who until recently had argued that the Pool of Siloam did not exist, have likewise been proven wrong by this accidental but remarkable find. The recent unearthing of Siloam’s stones has deepened my confidence in the accuracy of God’s Word, and it serves as a memorial and personal reminder to me of the divinity of Jesus—the prophesied Servant, the Messiah, my Deliverer.